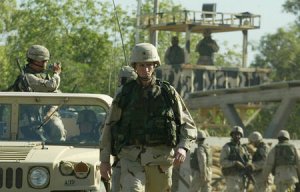 There is a rumor floating around that we captured Abu Musab al-Zarqawi ... I can think of no better event to report on the first day of Iraqi sovereignty but unfortunately this is not true

After we've notified the families, I think we're going to be a little more forthcoming on what happened up there

The operation resulted in the capture of one enemy fighter, an SA-16 missile, an SA-14 missile, 31 rocket-propelled-grenade rounds and a large quantity of small arms and ammunition

Mark Traecey Patrick Kimmitt (born 21 June 1954) was the 16th Assistant Secretary of State for Political-Military Affairs, serving under George W. Bush from August 2008 to January 2009. Prior to joining the State Department, he was a Brigadier General in the United States Army, and served as the Deputy Assistant Secretary of Defense for Middle East. Kimmitt has also served as Deputy Director for Strategy and Plans for the United States Central Command, and Deputy Director for Operations/Chief Military Spokesman for Coalition Forces in Iraq, and served at NATO's SHAPE headquarters in Belgium.

Kimmitt was born in Fort Sill, Oklahoma, and is married to Catherine Kimmitt.

Kimmitt graduated from the United States Military Academy at West Point as a part of the class of 1976, and earned a Masters in Business Administration degree, graduating with distinction, from Harvard University as part of the class of 1984. He also received master's degrees from the United States Army Command and General Staff College and the National Defense University. He earned a certification as a Chartered Financial Analyst (CFA) while serving as Assistant Professor of Finance and Economics in the Department of Social Sciences at the United States Military Academy.

FULL ARTICLE AT WIKIPEDIA.ORG
This article is licensed under the GNU Free Documentation License.
It uses material from the Wikipedia article "Mark Kimmitt."