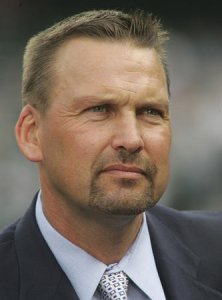 He's definitely one of those guys you don't think is going to hurt you and here he is, he ends up hurting you

Mark Eugene Grace (born June 28, 1964 in Winston-Salem, North Carolina) is a former Major League Baseball player for 16 seasons with the Chicago Cubs and Arizona Diamondbacks. His defensive position was first base. He batted left-handed and wore jersey number 17.

After playing baseball for San Diego State University, Grace was drafted by the Chicago Cubs in 1985. He spent three years playing in the Cubs farm system before making his major league debut May 2, 1988.

FULL ARTICLE AT WIKIPEDIA.ORG
This article is licensed under the GNU Free Documentation License.
It uses material from the Wikipedia article "Mark Grace."