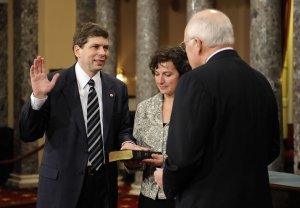 U.S. News // 1 year ago
Alaska Gov. Walker drops re-election bid
Alaska Gov. Bill Walker suspended his re-election campaign Friday, three weeks before Election Day, saying he didn't believe he could win a three-way race.
U.S. News // 5 years ago
Elizabeth Warren gets Senate leadership job
Senate Democrats, looking to tap into the political and fundraising prowess of Elizabeth Warren, have created a new leadership post for her.
Energy News // 5 years ago
U.S., Chinese 'best efforts' on climate may fall short
U.S. and Chinese leaders Wednesday agreed on a climate agenda to the praise of low-carbon advocates, but it might not be enough to change the energy debate.
U.S. News // 5 years ago
Angus King, Joe Manchin won't join GOP in Senate
Independent Sen. Angus King gave Democrats a piece of good news Wednesday, when he announced he will continue to caucus with their party in the new term.
U.S. News // 5 years ago
Alaska Senate, gov. races await thousands of absentee votes, could take weeks
The final tallies on Alaska's Senate and governor's races won't be in for several weeks, as tens of thousands of absentee and provisional ballots are counted.
U.S. News // 5 years ago
Election 2014: Republicans wrest control of Senate in big wins
Republicans won most of the competitive races in the 2014 midterm elections, taking control of the U.S. Senate and a number of governorships.
Energy News // 5 years ago
U.S. energy debate could shift with power on Capitol Hill
Results in Tuesday's U.S. elections may favor a pro-energy platform, though advocates fear the results will move the debate away from prevailing climate winds.
U.S. News // 5 years ago
Control of Congress, divisive issues face voters on Tuesday
Voters across the country face a slate of races to decide control of Congress and whether the nation is able to move forward on a host of divisive issues.
U.S. News // 5 years ago
Former state A.G. Dan Sullivan to be Republican Senate candidate in Alaska
Former Alaska Attorney General Dan Sullivan has won the Republican nomination for the U.S. Senate in a race that is already the most expensive in state history.
U.S. News // 5 years ago
McDonald promises systematic change at VA confirmation hearing
Senators looked to the Veterans Affairs nominee, Robert McDonald, for answers as talks for a compromise to fix the troubled department have stalled.
U.S. News // 6 years ago
Watchdog: Phoenix veterans waited 115 days for care [UPDATE]
An IG's report confirmed allegations that a Phoenix VA hospital masked the length of patient wait times, but didn't confirm if the extended waits led to deaths.
U.S. News // 6 years ago
Begich hit with first VA scandal ad
It was only a matter of time before the scandal plaguing the VA surfaced in an attack ad for the midterms.
U.S. News // 6 years ago
Senators want 'heads to roll' over Phoenix VA scandal
Lawmakers made little effort to disguise their anger over recent revelations of systematic abuse at veterans healthcare centers in Arizona last month.
U.S. News // 6 years ago
Senate Democrats pull all-nighter on climate change
U.S. Senate Democrats, showing consensus on the need to address climate change, spoke in a marathon that ended early Tuesday before legislative business began.
U.S. News // 6 years ago
Kerry to name special ambassador for arctic issues
U.S. Secretary of State John Kerry says he will create a position that will deal with diplomatic issues arising from renewed global interest in the arctic.

This city continues to run because we've got great people working

What I've been hearing is people are truly ready for change

I know your administration already is strongly supportive of this project, and I commend your appointment of a new federal coordinator of the Alaska natural gas pipeline project

With more than three decades of experience in Alaska and more than a decade working on oil and gas issues, Larry is uniquely qualified to take this position, work with the White House on behalf of Alaskans and get Alaska's gas to market

Mark Peter Begich (pronounced /ˈbɛɡɪtʃ/; born March 30, 1962) is the junior United States Senator from Alaska and a member of the Democratic Party. A former mayor of Anchorage, he served on the Anchorage Assembly for almost ten years prior to being elected mayor in 2003. In the highly competitive 2008 Alaska Senate election, Begich defeated incumbent Ted Stevens, the longest serving Republican member of the Senate of all time.

Born in Anchorage, he is the son of U.S. Representative Nick Begich, who disappeared and was presumed dead following a 1972 plane crash. He graduated from high school and has taken continuing education classes at University of Alaska Anchorage, but does not have a college degree. At age 26 he was elected to the Anchorage Assembly. After serving as chairman for three years, he left the Assembly in 1998. Begich ran two unsuccessful campaigns for mayor in 1994 and 2000. He was finally elected in 2003, winning a narrow three-way race by 11 votes.

Begich handily won the Democratic nomination in the state's 2008 U.S. Senate election. He faced longtime incumbent Republican Ted Stevens, who was facing ethics and corruption charges during his re-election campaign. Stevens was convicted of felony violations a week before the election, and Begich won by a narrow margin.

FULL ARTICLE AT WIKIPEDIA.ORG
This article is licensed under the GNU Free Documentation License.
It uses material from the Wikipedia article "Mark Begich."
Back to Article
/