Top News // 3 days ago
The Almanac
On Jan. 14, 1969, a series of explosions aboard the nuclear aircraft carrier USS Enterprise off Hawaii killed 27 men. 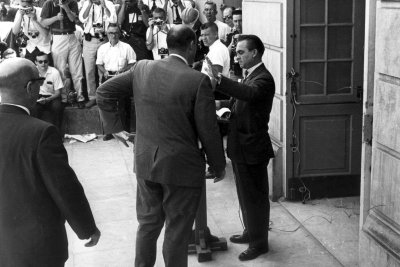 Hugh Marjoe Ross Gortner, generally known as Marjoe Gortner (born January 14, 1944 (1944-01-14) (age 66) in Long Beach, California), is a former revivalist who first gained a certain fame in the late 1940s when he became the youngest ordained preacher at the age of four. He then gained outright notoriety in the 1970s when he starred in an Oscar-winning, behind-the-scenes documentary about the lucrative business of Pentecostal preaching. The name "Marjoe" is a portmanteau of the names "Mary" and "Joseph".

When Gortner was three, his father Vernon, a third generation minister, noticed his son's talent for mimicry and overall fearlessness of strangers and public settings. His parents claimed he had received a vision from God during a bath but this was later conceded by Marjoe to be a lie his parents forced him to repeat. He claimed they enforced this by mock-drowning him, because they could not beat him, which would leave bruises which might be noticed during his many public appearances. They began training him to deliver sermons, complete with dramatic gestures and emphatic lunges. By the time he was four, his parents arranged for him to perform a marriage ceremony for a film crew from Paramount studios, referring to him as "the youngest ordained minister in history." Like much in Gortner's early life it is hard to say for sure who exactly ordained him, if his father ordained him, or if he was even ordained at all.

Until the time he was a teenager, Gortner and his parents traveled the United States, holding revival meetings. As well as teaching him scriptural passages, his parents also taught him several money-making tactics, involving the sale of supposedly "holy" articles at revivals which promised to heal the sick and dying. By the time he was sixteen, his family had amassed what he later estimated to be three million dollars. Shortly after Gortner's sixteenth birthday, his father absconded with the money, and a disillusioned Marjoe Gortner left his mother for San Francisco, where he was taken in by and became the lover of an older woman. He spent the remainder of his teenage years as an itinerant hippie until his early twenties, when, hard pressed for money, he decided to put his old skills to work and re-emerged on the circuit with a charismatic stage-show modeled after those of contemporary rockers, most notably Mick Jagger. He made enough to take six months off every year, during which he returned to California, surviving on the previous six months' earnings.

FULL ARTICLE AT WIKIPEDIA.ORG
This article is licensed under the GNU Free Documentation License.
It uses material from the Wikipedia article "Marjoe Gortner."
Back to Article
/