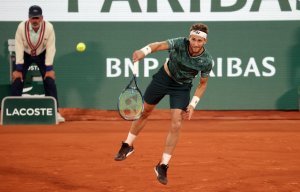 Sports News // 2 months ago
French Open tennis: Rafael Nadal, Casper Ruud advance to men's final
Rafael Nadal moved on to the French Open men's final Friday after his opponent, third-seeded Alexander Zverev of Germany, was forced to retire because of an ankle injury.

Sports News // 2 months ago
Medvedev, Tsitsipas upset in Paris; Swiatek, Pegula advance to French Open quarters
U.S. Open champion Daniil Medvedev and 2021 runner-up Stefanos Tsitsipas were upset in the fourth round of the French Open on Monday, as Iga Swiatek and Jessica Pegula advanced to quarterfinals of the women's draw.

Marin Čilić (Croatian pronunciation: , born 28 September 1988), is a Croatian professional tennis player. His career high ATP ranking is no. 9, achieved on February 22, 2010, following his best-ever performance at a Grand Slam, reaching the semi-finals in the 2010 Australian Open. Čilić developed his career at a tender age; his potential was realized by local hometown coaches who saw him play and encouraged his move to Zagreb for further training. He was soon befriended by his fellow countryman Goran Ivanišević who introduced him to current coach Bob Brett. He went on to turn professional in 2005.

Čilić was born and grew up in Međugorje, a town in Bosnia and Herzegovina. He was raised Roman Catholic. His father Zdenko was determined that his sons - Marin and older brothers Vinko and Goran - would have the opportunities he lacked in playing sports. When the first tennis courts in the town were built in 1991, Marin and his friends were amongst the first to play on them. At the recommendation of Goran Ivanišević, Čilić moved in 2004 to San Remo, Italy at the age of 15 to work with Ivanišević's former coach Bob Brett.

Marin began playing on the junior ITF circuit in Spring 2004. At the start he played on clay courts, winning the La Vie Junior Cup Villach in singles and the Dutch Junior Open in doubles. He then qualified for the 2004 US Open, where he lost in the second round to Sam Querrey. In 2005, he won the French Open title in Boy's singles, beating Andy Murray in the semi-final and Antal van der Duim in the final. He finished 2005 ranked number two behind American Donald Young. While on the junior circuit, he won six tournaments in singles and four in doubles with his Canadian partner, Greg Kates.

FULL ARTICLE AT WIKIPEDIA.ORG
This article is licensed under the GNU Free Documentation License.
It uses material from the Wikipedia article "Marin Cilic."