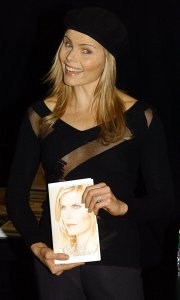 Top News // 4 years ago
The Almanac
On Nov. 22, 1963, President John F. Kennedy, 46, in the third year of his first term, was assassinated while riding in a motorcade in Dallas.

They have memorialized my grandfather, his house and his lifestyle there, and it struck me that it needed to be done in the country of his birth

Hemingway was born in Mill Valley, California, the third daughter of Byra Louise (née Whittlesey) Hemingway and Jack Hemingway, a writer. Her sisters are Joan Hemingway (born 1950) and Margaux Hemingway (born 1954). Margaux, who became an actress and model, died of a barbiturate overdose in 1996 at age 42.

Her paternal grandparents were Hadley Richardson and writer Ernest Hemingway, whom she never met, as he committed suicide several months before she was born. She was named after the Cuban port of Mariel—a village that her father and grandfather visited regularly as sportsmen to fish. Her middle name was after her paternal grandmother.

FULL ARTICLE AT WIKIPEDIA.ORG
This article is licensed under the GNU Free Documentation License.
It uses material from the Wikipedia article "Mariel Hemingway."