U.S. News // 1 month ago
New Orleans mayor walks back threat of canceling Mardi Gras
Mayor LaToya Cantrell on Friday walked back her threat to cancel Mardi Gras over a shortage of police and emergency services in New Orleans.

U.S. News // 1 year ago
Millions remain in the dark in Texas as Midwest, South endure deep freeze
Millions of people in Texas were still without power at the start of the day Wednesday, owing to the major winter storm that spans a large swath of the United States and produced rare snowfall in the Lone Star State.

U.S. News // 1 year ago
New COVID-19 cases, deaths in U.S. dip to lowest since fall
New coronavirus cases and deaths in the United States have dipped to their lowest levels in months, according to data Monday from Johns Hopkins University.

It's going to be a bit more mellow than usual

The report says that a work can explore but not promote homosexuality. Works that cover homosexuality must then always take the apologetic position. Art is about how a story is told and not having to be preoccupied with how content is managed 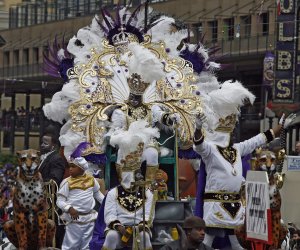 The terms "Mardi Gras" ( /ˈmɑrdiɡrɑː/), "Mardi Gras season", and "Carnival season", in English, refer to events of the Carnival celebrations, beginning on or after Epiphany and culminating on the day before Ash Wednesday. Mardi Gras is French for "Fat Tuesday" (in ethnic English tradition, Shrove Tuesday), referring to the practice of the last night of eating richer, fatty foods before the ritual fasting of the Lenten season, which begins on Ash Wednesday. Related popular practices are associated with celebrations before the fasting and religious obligations associated with the penitential season of Lent. Popular practices include wearing masks and costumes, overturning social conventions, dancing, sports competitions, parades, etc. Similar expressions to Mardi Gras appear in other European languages sharing the Christian tradition. In English, the day is called Shrove Tuesday, associated with the religious requirement for confession before Lent begins.

In many areas, the term "Mardi Gras" has come to mean the whole period of activity related to the celebratory events, beyond just the single day. In some US cities, it is now called "Mardi Gras Day" or "Fat Tuesday". The festival season varies from city to city, as some traditions consider Mardi Gras the entire period between Epiphany or Twelfth Night and Ash Wednesday. Others treat the final three-day period before Ash Wednesday as the Mardi Gras. In Mobile, Alabama, Mardi Gras-associated social events begin in November, followed by mystic society balls on Thanksgiving, then New Year's Eve, followed by parades and balls in January and February, celebrating up to midnight before Ash Wednesday. In earlier times parades were held on New Year's Day. Other cities famous for Mardi Gras celebrations include Rio de Janeiro, Brazil, Barranquilla, Colombia, Port of Spain, Trinidad and Tobago, Quebec City, Canada; Mazatlán, Sinaloa in Mexico; and New Orleans, Louisiana, United States.

Carnival is an important celebration in Catholic European nations. In the United Kingdom and Ireland, the week before Ash Wednesday is called "shrovetide", ending on Shrove Tuesday. It has its popular celebratory aspects as well. Pancakes are a traditional food. Pancakes and related fried breads or pastries made with sugar, fat and eggs are also traditionally consumed at this time in many parts of Latin America and the Caribbean.

FULL ARTICLE AT WIKIPEDIA.ORG
This article is licensed under the GNU Free Documentation License.
It uses material from the Wikipedia article "Mardi Gras."