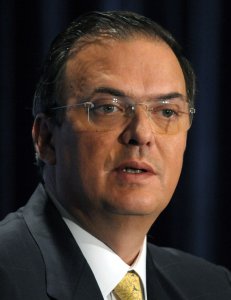 World News // 6 months ago
Evo Morales accepts asylum in Mexico
Former Bolivian President Evo Morales said Monday that he is leaving for Mexico after the country accepted his request for asylum.

World News // 9 months ago
Mexico says El Paso massacre was terrorism aimed at Mexican citizens, vows probe
Mexico's top diplomat said he considers Saturday's mass shooting in El Paso, Texas, to be an act of terrorism against Mexican citizens and said his government will be participating in the investigation.

U.S. News // 10 months ago
El Paso suspect charged with capital murder; possible hate crimes
The 21-year-old lone suspect in Saturday's massacre at a Walmart Supercenter in El Paso, Texas, that killed 20 people is being held on state capital murder charges and his actions are being investigated as as federal hat

Voices // 11 months ago
Migrants will pay the price of Mexico's tariff deal with Trump
Mexican President Andrés Manuel López Obrador is celebrating an agreement avoiding U.S. tariffs as a major triumph for his government. But it will come at great cost to Mexico and migrants fleeing poverty and violence.

Ebrard is the son of architect Marcelo Ebrard Maure and Marcela Casaubon (French Jewish lineage). He received a bachelor's degree in international relations from El Colegio de México, and specialized in public administration and planning at the École nationale d'administration of France. He was married to Francesca Ramos Morgan and had two daughters and one son: Francesca, Anne Dominique, and Marcelo Ebrard Ramos. He later divorced and married Mexican soap-opera actress Mariagna Prats.

Ebrard became a member of the Institutional Revolutionary Party (PRI) in 1978. After volunteering in the presidential campaigns of 1976 and 1982, serving as an advisor to the secretary-general in 1988 and being elected to the Chamber of Deputies, Ebrard Casaubon left the PRI with Manuel Camacho in 1995 to found the now-extinct Party of the Democratic Center (PCD). In 2000 he briefly campaigned for the 2000 Head of Government election for the PCD before stepping down in March 2000 and throwing his support behind Andrés Manuel López Obrador as the candidate of the multi-party Alliance for Mexico City.

FULL ARTICLE AT WIKIPEDIA.ORG
This article is licensed under the GNU Free Documentation License.
It uses material from the Wikipedia article "Marcelo Ebrard."
Back to Article
/