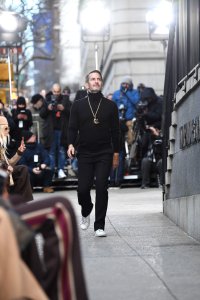 Entertainment News // 1 month ago
Naomi Campbell celebrates birth of first child
Supermodel Naomi Campbell announced she is a mom to a newborn daughter.

Entertainment News // 1 year ago
Model Slick Woods recovering after seizure
Slick Woods said her friend, photographer Chey Allegra, saved her life after she had a seizure in the middle of the night.

Entertainment News // 3 years ago
Marc Jacobs gets engaged to boyfriend at Chipotle
Fashion designer Marc Jacobs proposed to Charly Defrancesco with a flash mob at a Chipotle on his birthday.

Marc Jacobs (born April 9, 1963 in New York City) is an American fashion designer and the head designer for Marc Jacobs, as well as the diffusion line Marc by Marc Jacobs. Jacobs is currently the Creative Director of the French design house Louis Vuitton.

Jacobs was born in New York City to Jewish American parents. He attended the The New School, studying at the university's art and design division, Parsons The New School for Design. He lived in Teaneck, New Jersey with his mother, sister and younger brother, and attended Teaneck High School but also attended and graduated from the New York High School of Art and Design. At fifteen, Jacobs worked as a stockboy at Charivari, an avant-garde clothing boutique in New York City. From there, Jacobs entered The New School in New York City. During his tenure at Parsons, Jacobs won the Perry Ellis Gold Thimble Award in 1984 and in the same year was also awarded the Chester Weinberg Gold Thimble Award and the Design Student of the Year Award.

While still at Parsons, Jacobs designed and sold his first line of hand-knit sweaters. He designed his first collection for Reuben Thomas, Inc., under the Sketchbook label. Following his studies at Parsons, Jacobs began to design at Perry Ellis after its founder had died. Jacobs became prominent on the fashion scene when he designed a "grunge" collection for Perry Ellis, leading to his dismissal in 1993. With Robert Duffy, Jacobs formed Jacobs Duffy Designs Inc., which continues to this day. In 1986, backed by Onward Kashiyama USA, Inc., Jacobs designed his first collection bearing the Marc Jacobs label. In 1987 Jacobs was the youngest designer to have ever been awarded the fashion industry's highest tribute, The Council of Fashion Designers of America (CFDA) Perry Ellis Award for New Fashion Talent.

FULL ARTICLE AT WIKIPEDIA.ORG
This article is licensed under the GNU Free Documentation License.
It uses material from the Wikipedia article "Marc Jacobs."
Back to Article
/