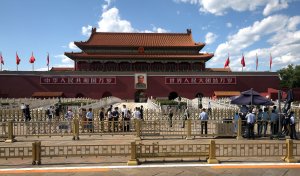 World News // 3 weeks ago
Top Chinese official says capitalist U.S. 'not a true democracy'
A day after China's Communist Party elevated President Xi to elite historical status, a top official in the party criticized the U.S. and Western allies on Friday and said they're not at all concerned with democracy.

World News // 5 months ago
Death of Mao Zedong's son during Korean War comes under scrutiny
The history of the son of former Chinese leader Mao Zedong is being rewritten under Xi Jinping, according to a recent press report.

World News // 1 year ago
Analyst: COVID-19 swept across China despite Xi Jinping policy
Chinese President Xi Jinping has touted his country's battle against COVID-19 as a significant strategic achievement, but Xi's policy priorities, established well before, tell a different story, according to an analyst.

This question has been raised several times in the last couple of years. This group is totally irrelevant with Mao Zedong. We also feel unsatisfied with the connection between their ideals and Mao Zedong Thought

Know the enemy and know yourself, and you can fight a hundred battles with no danger of defeat

Mao Zedong, also transliterated as Mao Tse-tung  listen (help·info), and commonly referred to as Chairman Mao (December 26, 1893 – September 9, 1976), was a Chinese Communist revolutionary, guerrilla warfare strategist, Marxist political philosopher, and leader of the Chinese Revolution. He was the architect and founding father of the People's Republic of China (PRC) from its establishment in 1949, and held authoritarian control over the nation until his death in 1976. His theoretical contribution to Marxism–Leninism, along with his military strategies and brand of policies, are collectively known as Maoism.

Mao rose to power by commanding the Long March, forming a Second United Front with Nationalists during the Second Sino-Japanese War to repel a Japanese invasion, and leading the Communist Party of China (CPC) to victory against Chiang Kai-shek's Kuomintang (KMT) in the Chinese Civil War. After solidifying the reunification of China through his Campaign to Suppress Counterrevolutionaries, Mao enacted sweeping land reform, by using violence and terror to overthrow the feudal landlords before seizing their large estates and dividing the land into people's communes. During the years when Mao was China’s 'Great Helmsman', a range of positive changes came to China. These included doubling the school population, providing universal housing, abolishing unemployment and inflation, increasing health care access, and dramatically raising life expectancy. As a result, Mao is still officially held in high regard by many in China as a great political strategist, military mastermind, and savior of the nation. Maoists further promote his role as a theorist, statesman, poet, and visionary, while anti-revisionists continue to defend most of his policies.

Mao remains a controversial figure to this day, with a contentious legacy that is subject to continuing revision and fierce debate. Nationwide political campaigns led by Mao, such as the Great Leap Forward and the Cultural Revolution, are often considered catastrophic failures. While China's population almost doubled during the period of Mao's leadership (from around 550 to over 900 million), his rule from 1949 to 1976 is believed to have caused the deaths of 40 to 70 million people. Severe starvation during the Great Chinese Famine, mass suicide as a result of the Three-anti/five-anti campaigns, and political persecution during both the Anti-Rightist Movement and struggle sessions all resulted from these programs. His campaigns and their varying disastrous consequences are further blamed for damaging the culture and society of China, as historical relics were destroyed and religious sites were ransacked.

FULL ARTICLE AT WIKIPEDIA.ORG
This article is licensed under the GNU Free Documentation License.
It uses material from the Wikipedia article "Mao Zedong."