Movies // 2 months ago
'Princess Bride' remake with Jennifer Garner, Joe Jonas, Sophie Turner debuting Monday
A remake of the classic comedy adventure, "The Princess Bride," has been filmed from actors' homes during the coronavirus pandemic.

TV // 2 years ago
Emmys 2018: Complete list of winners
The 70th annual Primetime Emmy Awards recognizes excellence in television. Here is the full list of winners from the event.

TV // 2 years ago
'Homeland' to end with Season 8
Showtime said Season 8 of "Homeland" will be the last for the global thriller starring Claire Danes and Mandy Patinkin. 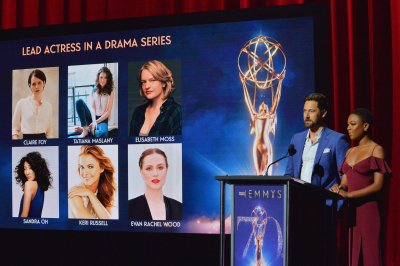 TV // 2 years ago
'Game of Thrones,' 'SNL,' 'Westworld' lead the Emmy field
"Game of Thrones" led with 22 when nominations for the 70th annual Emmy Awards were announced in Los Angeles Thursday morning.

TV // 2 years ago
'Homeland' Season 7 gets trailer, premiere date
Season 7 of "Homeland," the political thriller starring Claire Danes and Mandy Patinkin, is to premiere on Showtime on Feb. 11.

Mandel Bruce "Mandy" Patinkin ( /pəˈtɪŋkɪn/; November 30, 1952, Chicago, Illinois) is an American actor of stage and screen and a tenor vocalist. Patinkin is a noted interpreter of the music of Stephen Sondheim and is known for his work in musical theatre, originating iconic roles such as Georges Seurat in Sunday in the Park with George, Archibald Craven in The Secret Garden and Burrs in The Wild Party. He has also appeared in television series such as Chicago Hope, Dead Like Me and the first two seasons of Criminal Minds. His most noted film role was as Inigo Montoya in The Princess Bride. Other noteworthy film roles include Alien Nation, Yentl, Men With Guns, Run Ronnie Run, Dick Tracy, and The Adventures of Elmo in Grouchland.

Patinkin was born in Chicago, Illinois, of Russian and Polish Jewish descent, the son of Doris "Doralee" Sinton, a homemaker, and Lester Patinkin, who worked for the People's Iron & Metal Company and the Scrap Corporation of America. His mother wrote Grandma Doralee Patinkin's Jewish Family Cookbook. Patinkin is a cousin of Mark Patinkin, author and nationally syndicated columnist for The Providence Journal, and Jason "Dink" Patinkin, President of Columbia University's EarthCo. One of his other cousins is Sheldon Patinkin of Columbia College Chicago's Theater Department and a founder of The Second City.

Patinkin grew up in a middle class Jewish family and was raised in Conservative Judaism, attending religious school daily "from the age of seven to 13 or 14" and singing in synagogue choirs, as well as attending the Camp Surah in Michigan. He attended South Shore High School, Kenwood Academy (1970 graduate), the University of Kansas, and Juilliard School. At Juilliard, he was a classmate of Kelsey Grammer. When the producers of the popular American sitcom Cheers were auditioning for the role of Dr. Frasier Crane, Patinkin put Grammer's name forward.

FULL ARTICLE AT WIKIPEDIA.ORG
This article is licensed under the GNU Free Documentation License.
It uses material from the Wikipedia article "Mandy Patinkin."
Back to Article
/