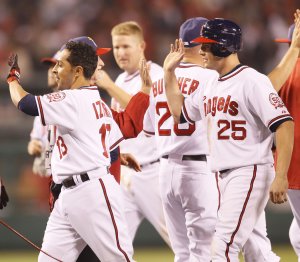 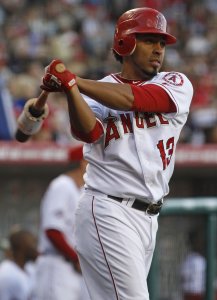 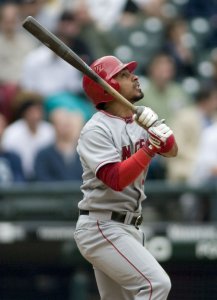 Maicer Eduardo Izturis (pronounced /ˈmaɪsɛər ɪsˈtʊərɪs/) (born September 12, 1980 in Barquisimeto, Lara State, Venezuela) is a Major League Baseball third baseman, second baseman, and shortstop for the Los Angeles Angels of Anaheim. He is a switch-hitter and throws right-handed. Izturis is the half brother of Baltimore Orioles shortstop César Izturis.

He was signed by the Cleveland Indians as a non-drafted free agent on April 1, 1998, and was traded to the Montreal Expos at the end of the 2003 season.

In 2004, Izturis hit .338 with three home runs and 36 RBI for the Triple-A Edmonton Trappers before being promoted to the Major League level with the Montreal Expos. He registered a hit in his August 27, 2004 debut, singling off San Diego Padres right-hander Dennis Tankersley in the second inning. In 32 games with the Expos, Izturis hit .206 (22-for-107) with one home run and 14 RBI.

FULL ARTICLE AT WIKIPEDIA.ORG
This article is licensed under the GNU Free Documentation License.
It uses material from the Wikipedia article "Maicer Izturis."