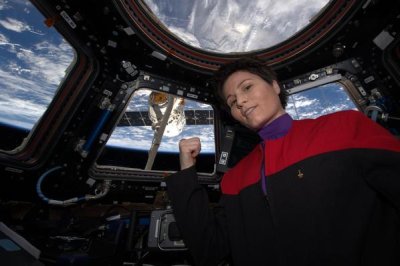 AFTE is based on the idea that if one learns how to control these responses and bring them back to normal, then many of the symptoms that accompany the problem are relieved

Among many patients nowadays, there is a trend toward wanting to get well with as little intervention and as few drugs as possible

BioSentient is examining AFTE as a treatment for anxiety, nausea, migraine and tension headaches, chronic pain, hypertension and hypotension, and stress-related disorders

Mae Carol Jemison (born October 17, 1956) is an African American physician and NASA astronaut. She became the first African American woman to travel in space when she went into orbit aboard the Space Shuttle Endeavour on September 12, 1992.

Mae Carol Jemison was born in Decatur, Alabama, the youngest child of Charlie Jemison and Dorothy Green. Her father was a maintenance supervisor for a charity organization, and her mother worked most of her career as an elementary school teacher of English and math at the Beethoven School in Chicago. The family moved to Chicago, Illinois, when Jemison was three years old, to take advantage of better educational opportunities there. Jemison says that as a young girl growing up in Chicago she always assumed she would get into space. "I thought, by now, we'd be going into space like you were going to work." She said it was easier to apply to be a shuttle astronaut, "rather than waiting around in a cornfield, waiting for ET to pick me up or something."

As a child growing up, Jemison learned to make connections to science by studying nature. "It sounds a little gross, but I was fascinated with pus," Jemison said. Once when a splinter infected her thumb as a little girl, Jemison's mother turned it into a learning experience. She ended up doing a whole project about pus. Jemison wouldn't let anyone dissuade her from pursuing a career in science. "In kindergarten, my teacher asked me what I wanted to be when I grew up, and I told her a scientist," Jemison says. "She said, 'Don't you mean a nurse?' Now, there's nothing wrong with being a nurse, but that's not what I wanted to be."

FULL ARTICLE AT WIKIPEDIA.ORG
This article is licensed under the GNU Free Documentation License.
It uses material from the Wikipedia article "Mae Jemison."
Back to Article
/