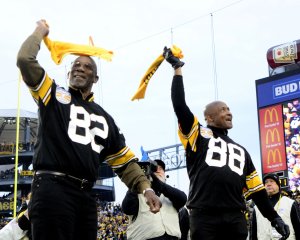 We faxed them every 24 hours. We complied with the law

I was drafted by the Pittsburgh Steelers in 1974, and tonight, I'm drafted by Pennsylvania to be governor

Exercise is an essential part of what we do every day

Lynn Curtis Swann (born March 7, 1952) is an American former professional football player and sportscaster, and current politician. In 2006, he was the Republican nominee to run against the incumbent Ed Rendell for Pennsylvania Governor.

Swann was born in Alcoa, Tennessee. As a youth, Swann was raised in Foster City and attended Junípero Serra High School in San Mateo, California where in addition to playing football he was a track star, leaping 24' 10" in the long jump. He later attended the University of Southern California, and completed a Bachelor of Arts Degree in Public Relations from the USC Annenberg School for Communication in 1974.

Swann is married to Charena Swann, a psychologist, and they have two sons. Charena's sister is married to Sherman Douglas of Syracuse University fame.

FULL ARTICLE AT WIKIPEDIA.ORG
This article is licensed under the GNU Free Documentation License.
It uses material from the Wikipedia article "Lynn Swann."
Back to Article
/