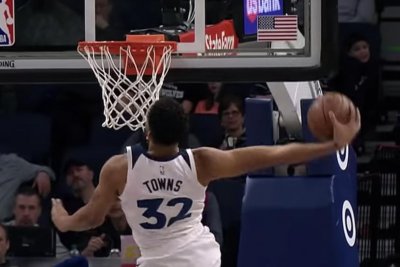 NBA // 3 years ago
NBA roundup: recap, scores, notes for every game played on February 2
WASHINGTON -- John Wall scored 16 of his 33 points in the fourth quarter and recorded 11 assists as the Washington Wizards ran their home winning streak to 16 games with a 116-108 victory over the Los Angeles Lakers on Thursday night.

NBA // 3 years ago
Damian Lillard helps Portland Blazers to 10th straight win over Los Angeles Lakers
LOS ANGELES -- After missing nine of 10 shots and scoring only two points in the first half, Damian Lillard didn't need any extra motivation in the second half.

NBA // 3 years ago
NBA roundup: recap, scores, notes for every game played on January 8
PHOENIX -- Kyrie Irving, LeBron James and Kevin Love combined for 80 points and the Cleveland Cavaliers blew a 20-point third-quarter lead but hung on to beat the Phoenix Suns 120-116 on Sunday.

NBA // 3 years ago
NBA roundup: recap, scores, notes for every game played on January 6
ORLANDO, Fla. -- Ryan Anderson scored 19 points and Patrick Beverley and Eric Gordon each added 17 points, leading the Houston Rockets to a 100-93 victory over the Orlando Magic on Friday night at Amway Arena.

Deng is a member of the Dinka ethnic group. When he was young, his father Aldo, a member of the Sudanese parliament, moved the family to Egypt to escape the Second Sudanese Civil War. In Egypt, they met former NBA center Manute Bol, another Dinka, who taught Deng's older brother, Ajou Deng, how to play basketball while also serving as a mentor for Luol himself. When they were granted political asylum, his family emigrated to Brixton, South London. Deng developed an interest in soccer, admiring Tino Asprilla of Newcastle United, but also continued to play basketball, and was invited to join England's 15-and-under teams in both sports. During this time, he began his career at Brixton Basketball Club. At the age of 13, he played for England's squad in the European Junior Men's Qualifying Tournament, averaging 40 points and 14 rebounds. He was named the MVP of the tournament. Next, he led England to the finals of the European Junior National Tournament, where he averaged 34 points and earned another MVP award.

At the age of 14, Luol moved to the United States to play basketball at Blair Academy in New Jersey, where one of his teammates was future NBA player Charlie Villanueva. Deng was also named a Tri-Captain at Blair along with Charlie Villanueva . During his senior year, Deng was considered the second most promising high school senior in America after LeBron James. He was named First Team All-America by Parade Magazine and USA Today, and was selected to play in the McDonald's High School All-America game, but could not play due to a foot injury. After graduation, he decided to attend Duke University. In one season at Duke, he appeared in 37 games and made 32 starts. He averaged 30.1 minutes and scored 15.1 points per game en route to a berth in the 2004 Final Four. He is only the 10th freshman in ACC history to lead all rookies in scoring, rebounding, and field goal percentage.

FULL ARTICLE AT WIKIPEDIA.ORG
This article is licensed under the GNU Free Documentation License.
It uses material from the Wikipedia article "Luol Deng."
Back to Article
/