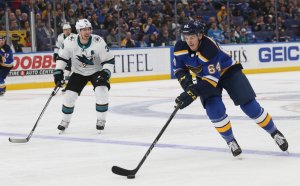 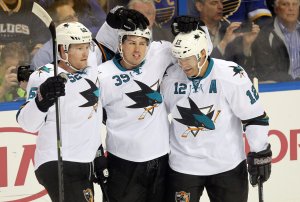 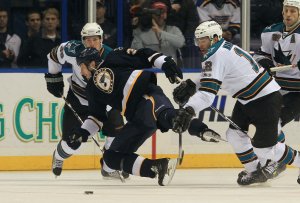 NHL // 3 years ago
Boston Bruins goalie Jaroslav Halak extends glove for sensational save
Boston goaltender Jaroslav Halak helped preserve the Bruins' lead with a phenomenal glove save in the second period against the San Jose Sharks on Tuesday.

NHL // 3 years ago
Hockey fight: Bruins' Zdeno Chara hooks headshots on Sharks' Evander Kane
Zdeno Chara and Evander Kane dropped their gloves and exchanged punches after hitting each other during the Boston Bruins' win against the San Jose Sharks.

Logan Couture (born March 28, 1989) is a Canadian professional ice hockey centre who currently plays for the San Jose Sharks of the National Hockey League (NHL). He was drafted by the Sharks ninth overall in the 2007 NHL Entry Draft.

Couture played his minor hockey initially with the 'DD' Lucan Irish followed by three years with the 'AAA' London Junior Knights of the Minor Hockey Alliance League and was a teammate of Los Angeles Kings' defenseman Drew Doughty. After his Bantam year with the Jr. Knights, Couture signed with the Junior B St. Thomas Stars.

In May 2005, Couture was drafted by the Ottawa 67's 12th overall in the 2005 OHL Priority Draft. Couture went on to score at a point-per-game pace as a rookie with 64 points in 65 games in 2005–06, third in league rookie scoring behind John Tavares and Sergei Kostitsyn. The next season, in 2005–06, Couture was added to the OHL roster for the 2006 ADT Canada-Russia Challenge, replacing Jordan Staal, who was retained by Pittsburgh Penguins. He was also selected to play for the Eastern Conference in the 2007 OHL All-Star Game, winning the shooting accuracy competition. After completing his second OHL season improving to 78 points in 54 games, Couture was drafted 9th overall by the San Jose Sharks in the 2007 NHL Entry Draft.

FULL ARTICLE AT WIKIPEDIA.ORG
This article is licensed under the GNU Free Documentation License.
It uses material from the Wikipedia article "Logan Couture."