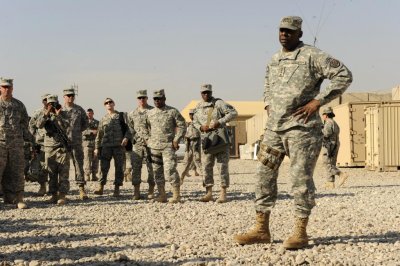 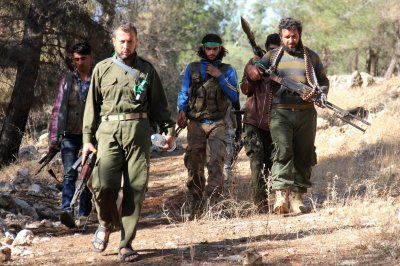 Commentary: Arnaud de Borchgrave // 5 years ago
Stemming the Syrian slaughter
Perhaps the coming UN General Assembly meeting in New York later this month could be a forum for an international conference on Syria. But that requires a sophisticated understanding of a very complicated array of factors. Whether any administration is capable of creating and executing a strategy on that basis is the haunting question.

World News // 5 years ago
CENTCOM: 4 more U.S.-trained Syrians enter fight against Islamic State
A CENTCOM official has revised the official size of the New Syrian Forces from "four or five" to nine, effectively doubling the size of the fighting force.

We'd always like to have more force, but quite frankly I think we've demonstrated that we've been very effective with what we have

During this transition period, our forces would continue to advise and train the Iraqi forces, to develop their security capabilities and support their ability to protect the Iraqi people

Lloyd James Austin III was born on August 8, 1953 in Mobile, Alabama. He graduated from the United States Military Academy (West Point) with a Bachelor of Science degree in June 1975. He also earned a Master's Degree in Education from Auburn University, and a Master's Degree in Business Management from Webster University. He is a graduate of the Infantry Officer Basic and Advanced courses, the U.S. Army Command and General Staff College, and the U.S. Army War College.

Austin was commissioned as a Second Lieutenant after graduation from West Point. His initial assignment was to the 3rd Infantry Division (Mechanized) in Germany where he served as a Rifle Platoon Leader in A Company, 1st Battalion, 7th Infantry and Scout Platoon Leader in the Combat Support Company, 1st Battalion, 7th Infantry. Following this assignment and attendance at the Infantry Officer Advanced Course, he was assigned to the 82nd Airborne Division at Fort Bragg, North Carolina, where he commanded the Combat Support Company, 2nd Battalion (Airborne), 508th Infantry and served as the Assistant S-3 (Operations) for 1st Brigade, 82nd Airborne Division.

FULL ARTICLE AT WIKIPEDIA.ORG
This article is licensed under the GNU Free Documentation License.
It uses material from the Wikipedia article "Lloyd Austin."
Back to Article
/