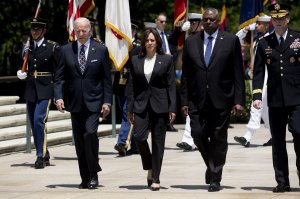 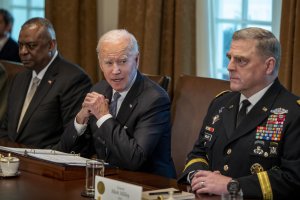 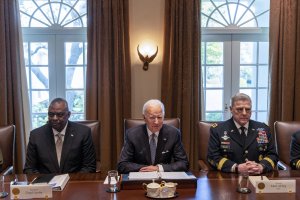 U.S. News // 2 days ago
Biden administration to increase access to medication abortion
The Biden administration is working to provide greater access to abortion pills in the wake of the Supreme Court's reversal of Roe vs. Wade, and the Pentagon announced abortions on military facilities will continue.

World News // 1 week ago
Taiwan defies 'big bully' China after latest air incursion
Taiwan's defense ministry said Wednesday it would not give in to "big bully" China, one day after Beijing's latest incursion of warplanes into the self-governing island's air defense identification zone.

World News // 2 weeks ago
U.S. Gen. Milley says Russian control of eastern Ukraine likely but not inevitable
After weeks of fighting, Russia's military is in control of at least 80% of Severodonetsk -- a city in eastern Ukraine that's believed to be the largest that's still under some Ukrainian control.

World News // 2 weeks ago
Taiwan rejects Beijing's claim of sovereignty over U.S.-used waterway between island, China
Taiwan on Tuesday called China's claim of sovereign rights over the Taiwan Strait a "fallacy" and said it supported U.S. naval ships conducting freedom of navigation exercises in the waterway.

U.S. News // 4 weeks ago
Stoltenberg: Finland, Sweden to meet Turkey for talks on joining NATO
NATO Secretary General Jens Stoltenberg is to meet this week with top U.S. officials in Washington, D.C., amid an effort by Finland and Sweden to join the defensive military alliance.

We'd always like to have more force, but quite frankly I think we've demonstrated that we've been very effective with what we have

During this transition period, our forces would continue to advise and train the Iraqi forces, to develop their security capabilities and support their ability to protect the Iraqi people

Lloyd James Austin III was born on August 8, 1953 in Mobile, Alabama. He graduated from the United States Military Academy (West Point) with a Bachelor of Science degree in June 1975. He also earned a Master's Degree in Education from Auburn University, and a Master's Degree in Business Management from Webster University. He is a graduate of the Infantry Officer Basic and Advanced courses, the U.S. Army Command and General Staff College, and the U.S. Army War College.

Austin was commissioned as a Second Lieutenant after graduation from West Point. His initial assignment was to the 3rd Infantry Division (Mechanized) in Germany where he served as a Rifle Platoon Leader in A Company, 1st Battalion, 7th Infantry and Scout Platoon Leader in the Combat Support Company, 1st Battalion, 7th Infantry. Following this assignment and attendance at the Infantry Officer Advanced Course, he was assigned to the 82nd Airborne Division at Fort Bragg, North Carolina, where he commanded the Combat Support Company, 2nd Battalion (Airborne), 508th Infantry and served as the Assistant S-3 (Operations) for 1st Brigade, 82nd Airborne Division.

FULL ARTICLE AT WIKIPEDIA.ORG
This article is licensed under the GNU Free Documentation License.
It uses material from the Wikipedia article "Lloyd Austin."