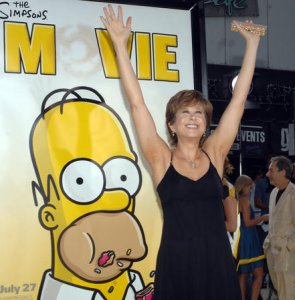 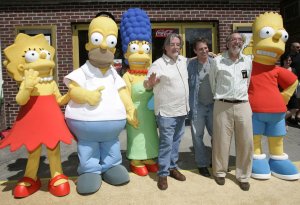 After all these years, she still makes pearls and a beehive work

God help me, I will ruin the lives of (five specific players), and whoever the recruits are

Despite our gains in insuring more children, we're spending less of our overall healthcare dollars on children

The gathering is to brief studio executives on the war ... and to discuss with them future projects that may be undertaken by the industry

News from the entertainment capital Nov 08, 2001

Lisa Marie Simpson is a fictional main character in the animated television series The Simpsons. She is the middle child, and elder daughter, of the eponymous family. She is voiced by Yeardley Smith and first appeared on television in The Tracey Ullman Show short "Good Night" on April 19, 1987. Lisa was created and designed by cartoonist Matt Groening while he was waiting in the lobby of James L. Brooks's office. Groening had been called to pitch a series of shorts based on Life in Hell but instead decided to create a new set of characters. He named the character after his younger sister Lisa Groening. After appearing on The Tracey Ullman Show for three years, the Simpson family got their own series on Fox, which debuted December 17, 1989.

At eight years of age, Lisa is the middle child of the Simpson family and elder daughter of Homer and Marge, younger sister of Bart and elder sister of Maggie. She is highly intelligent, plays the saxophone, has been a vegetarian since the seventh season, has been a Buddhist since season thirteen and supports a number of different causes. She has appeared in other media relating to The Simpsons – including video games, The Simpsons Movie, The Simpsons Ride, commercials and comic books – and inspired an entire line of merchandise.

Yeardley Smith originally tried out for the role of Bart, while Bart's voice actor Nancy Cartwright tried out for Lisa. Cartwright found that the character was not interesting at the time, so instead auditioned for Bart, and Smith's voice was too high for a boy, so she was given the role of Lisa. Because of her unusual pointed hair style, many animators consider Lisa the most difficult character to draw. In The Tracey Ullman Show shorts, Lisa was more of a "female Bart" and was equally mischievous, but as the series progressed, she became a more emotional and intellectual character.

FULL ARTICLE AT WIKIPEDIA.ORG
This article is licensed under the GNU Free Documentation License.
It uses material from the Wikipedia article "Lisa Simpson."