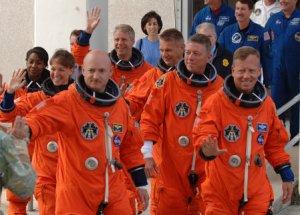 Movies // 1 year ago
Natalie Portman sees feminism in role of complex astronaut 'Lucy'
Actress Natalie Portman, an outspoken advocate of gender parity in the movie industry, finds a new platform in her role as an astronaut in "Lucy in the Sky," which opens in theaters Friday.

Top News // 4 years ago
The Almanac
On May 10, 1940, Winston Churchill is appointed prime minister of the United Kingdom following the resignation of Neville Chamberlain.

Top News // 5 years ago
The Almanac
UPI Almanac for Sunday, May 10, 2015
Odd News // 7 years ago
The almanac
UPI Almanac for Friday, May 10, 2013.
Odd News // 8 years ago
The almanac
UPI Almanac for Thursday, May 10, 2012.
U.S. News // 9 years ago
Ex-astronaut in kidnap case is out of Navy
Lisa Nowak, a former astronaut once accused of trying to kidnap a romantic rival, is no longer in the Navy, the service announced.
U.S. News // 1 decade ago
Former astronaut to remain on probation
A Florida judge says he has denied former astronaut Lisa Nowak's request to end probation early in a battery case against a female military officer.
U.S. News // 1 decade ago
Navy mulls punishment for ex-astronaut
Ex-astronaut Lisa Nowak faces possible military imprisonment for attacking a former U.S. Air Force captain over a love interest, authorities said.
U.S. News // 1 decade ago
Ex-astronaut pleads guilty in assault case
Lisa Marie Nowak, the former NASA astronaut accused in Florida of attacking a romantic rival, pleaded guilty to reduced charges in Florida Tuesday.

Lisa Marie Nowak (née Caputo) (born May 10, 1963) is a former American naval aviator naval officer and NASA astronaut. Born in Washington, D.C., she was selected by NASA in 1996 and qualified as a mission specialist in robotics. Nowak flew aboard Space Shuttle Discovery during the STS-121 mission in July 2006, where she was responsible for operating the robotic arms of the shuttle and the International Space Station.

Nowak gained international attention on February 5, 2007, when she was arrested in Orlando, Florida, and subsequently charged with the attempted kidnapping of U.S. Air Force Captain Colleen Shipman, who was romantically involved with astronaut William Oefelein. Nowak was released on bail, and initially pleaded not guilty to the charges, which included attempted kidnapping, burglary with assault, and battery. Her assignment to the space agency as an astronaut was terminated by NASA effective March 8, 2007. On November 10, 2009, Nowak agreed to a plea deal with prosecutors and pleaded guilty to charges of felony burglary of a car and misdemeanor battery.

Nowak remained a U.S. Navy captain until August 2010, when a naval board of inquiry, composed of three admirals, voted unanimously to reduce Nowak in rank to commander and to discharge her from the navy under "other than honorable conditions".

FULL ARTICLE AT WIKIPEDIA.ORG
This article is licensed under the GNU Free Documentation License.
It uses material from the Wikipedia article "Lisa Nowak."
Back to Article
/