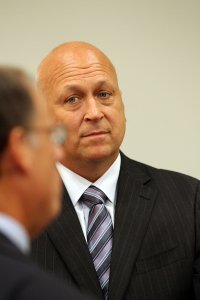 Goodman started dancing at the age of 19 after a short time as an engineering apprentice (for Harland and Wolff in Woolwich). He tried dancing only in an attempt to recover from a foot injury sustained while playing football. He turned professional, won various competitions, and retired from dancing after winning the British Championships at Blackpool in his late twenties.

During the 1970s and early 1980s, his dance school in Dartford was home to a very popular Saturday night youth disco, which helped to keep the majority of Dartford's young people out of trouble.

FULL ARTICLE AT WIKIPEDIA.ORG
This article is licensed under the GNU Free Documentation License.
It uses material from the Wikipedia article "Len Goodman."