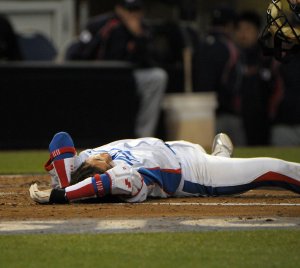 World News // 2 months ago
South Korea protesters clashing at comfort women site, report says
Tensions are rising between protesters at a weekly rally outside the Japanese Embassy in Seoul, according to a local press report. 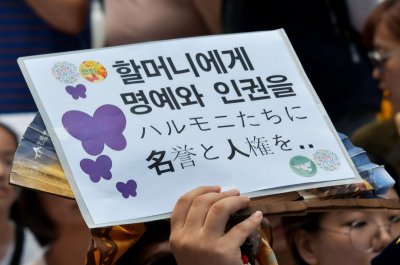 World News // 2 months ago
South Korea 'comfort women' activist group battles to survive amid scandal
An influential South Korean organization that has claimed for decades it represents the interests of "comfort women" may be fighting for its life. 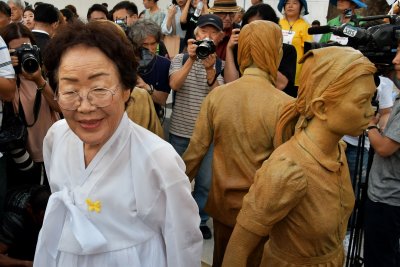 World News // 2 months ago
Ex-comfort woman decries 'betrayal' in South Korea activist scandal
The former South Korean comfort woman who accused an activist of misappropriating funds said Monday she had been "betrayed overnight" after being "used" by lawmaker-elect Yoon Mi-hyang for three decades.

World News // 3 months ago
South Korea politicians call for probe into comfort women activist
Members of South Korea's ruling and opposition parties are calling for an investigation into an activist suspected of misusing funds reserved for former comfort women.

World News // 1 year ago
Japanese man accused of hate crime a no-show at South Korea hearing
The absence of a Japanese national accused of a hate crime at Seoul Criminal District Court was palpable on Wednesday.

World News // 1 year ago
Japan reparations not the answer, former 'comfort woman' says
Lack of progress on a fund set up in 2015 to assist former "comfort women" may be becoming too much to bear for victims who seek an official apology.

Except for the few wrinkles on my face, I have not changed at all since I was turned into a sex slave at the age of 14. I remained unmarried

If foreign investors launch business here, we will refrain from taking labor actions

We will join efforts to promote foreign investment in the country

Lee Yong-dae (Hangul: 이용대) (born September 11, 1988 in Hwasun, Jeollanam-do) is a male badminton player from South Korea. He is by many considered a great talent and already a wonderful player, often being called the 'new' Park Joo-bong.

Struggling to find the right partner, he played several tournaments, not getting any big results; only two semi-finals in the Asian Satellite. With Ha Jung-eun as his partner, they won Asian Junior Championship.

FULL ARTICLE AT WIKIPEDIA.ORG
This article is licensed under the GNU Free Documentation License.
It uses material from the Wikipedia article "Lee Yong."
Back to Article
/