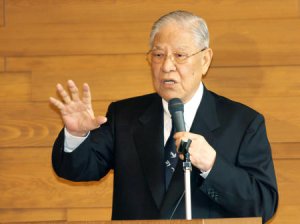 It's impossible to revise the Constitution. I've revised it six times already

Changes in Taiwan constitution debated May 30, 2004

But Taiwan didn't walk out of the shadow of the civil war until the March 20 election, when the (Chinese Nationalist Party's) party-state came to an end

Lee Teng-hui (traditional Chinese: 李登輝; simplified Chinese: 李登辉; pinyin: Lǐ Dēnghuī; born 15 January 1923) is a politician of the Republic of China (commonly known as Taiwan). He was the 7th, 8th, and 9th-term President of the Republic of China and Chairman of the Kuomintang (KMT) from 1988 to 2000. He presided over major advancements in democratic reforms including his own re-election which marked the first direct presidential election for the Republic of China. The first native Taiwanese to become ROC president and KMT chairman, Lee promoted the Taiwanese localization movement and led an aggressive foreign policy to gain diplomatic allies. Critics accused him of betraying the party he headed, secret support of Taiwanese independence, and involvement in corruption (black gold politics).

After leaving office Lee was expelled from the KMT for his role in founding the pro-independence Taiwan Solidarity Union (TSU), which forms part of the Pan-Green Coalition alongside Taiwan's Democratic Progressive Party. (Lee is considered the "spiritual leader" of the TSU.) Lee has been outspoken in support for Taiwanese independence though not necessarily a formal declaration.

Lee was born to a Hakka family in the rural farming community of Sanzhi (Sanshi-kyō), Taipei County (Taihoku, now New Taipei City), Taiwan (under Japanese rule at that time). As a child, he often dreamed of traveling abroad, and became an avid stamp collector. Growing up during the Japanese rule of Taiwan, he developed a strong affinity for Japan. His father was a middle-level Japanese police aide and his brother served and died in the Imperial Japanese Navy. Lee—one of only four Taiwanese students in his high school class—graduated with honors and was given a scholarship to Japan's Kyoto Imperial University, then known as Kyoto Technical School. A lifelong collector of books, Lee was heavily influenced by Japanese thinkers like Nitobe Inazo and Nishida Kitaro in Kyoto. In 1944 he too volunteered for service in the Imperial Japanese Army and became a second lieutenant officer of an anti-aircraft gun in Taiwan. He was ordered back to Japan in 1945 and participated in the clean-up after the great Tokyo firebombing of March, 1945. Lee stayed in Japan after the surrender and graduated from Kyoto University in 1946.

FULL ARTICLE AT WIKIPEDIA.ORG
This article is licensed under the GNU Free Documentation License.
It uses material from the Wikipedia article "Lee Teng-hui."