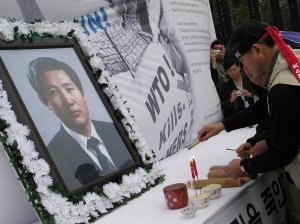 World News // 1 year ago
Kim Yo Jong sued over destruction of inter-Korean liaison office
A South Korean lawyer is suing North Korea's Kim Yo Jong over the demolition of the Inter-Korean Liaison Office in Kaesong.

World News // 3 years ago
Some in S. Korea uncertain about families after long separation, reunion
Some participants at the North-South Korea family reunion have doubted people they met at the event as their true family members.

It can't be ruled out that South Korea may suffer from a long-term depression, although the economic conditions in South Korea are less severe than in Japan in the past

The government would not give up the hope of achieving 5-percent GDP (gross domestic product) growth. It is possible to achieve if we try hard

The spending plan can hardly suspend the country's slowing trend

Harisu (Hangul: 하리수; Chinese: 河莉秀) is the stage name of Lee Kyung-eun (born Lee Kyung-yup, February 17, 1975), a transsexual pop singer, model and actress from South Korea. Born biologically male, Harisu identified as female from early childhood, and underwent sex reassignment surgery in the 1990s. She is noted for being South Korea's first transgender entertainer, and in 2002 became only the second person in Korea to legally change their gender. Her stage name is an adaptation of the English phrase "hot issue".

Harisu first gained public attention in 2001, after appearing in a television commercial for DoDo cosmetics. The commercial was a big success and ended up launching her career, allowing her to branch out into other fields such as music and acting. So far she has recorded five Korean musical albums, switching genres between techno and R&B, and her overseas releases have featured songs recorded in Mandarin. Her first major acting role was in the 2001 film Yellow Hair 2, and since then her credits have included Hi! Honey, a Taiwanese drama series, and Colour Blossoms, an erotic drama by Hong Kong filmmaker Yonfan.

On May 19, 2007, Harisu married boyfriend Micky Jung, whom she had been dating for two years previously.

FULL ARTICLE AT WIKIPEDIA.ORG
This article is licensed under the GNU Free Documentation License.
It uses material from the Wikipedia article "Lee Kyung."