Sports News // 5 years ago
Tom Watson leads Senior Open by 1
Tom Watson nearly shot his age on Thursday as he opened with a 4-under 66 at the U.S. Senior Open Championship and was one stroke clear of six players. 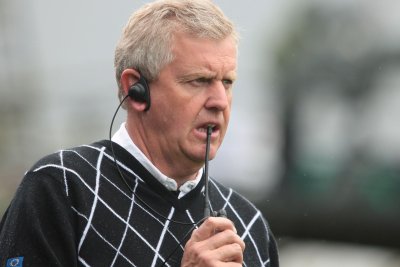 Sports News // 5 years ago
Colin Montgomerie takes early lead at ACE Group Classic
Colin Montgomerie started his week with a 6- under 66 in Friday's first round and he holds a 1-shot lead at the ACE Group Classic.
Sports News // 7 years ago
UPI NewsTrack Sports
Nationals stay perfect with win over Miami ... Jagr scores in Boston debut ... Bettencourt shares lead at Texas Open ... Head of Pac-12 refs resigns under fire ... Sports news from United Press International.
Sports News // 7 years ago
Bettencourt shares lead at Texas Open
Matt Bettencourt, hoping to regain a full-time job on the PGA Tour, survived difficult conditions Thursday to share the first-round lead at the Texas Open.
Sports News // 8 years ago
Maggert seeks rare PGA Tour win
Jeff Maggert, whose only PGA Tour win in the last 13 years came at this event, grabbed a share of the lead Thursday after one round of the St. Jude Classic.

This is the best place to be, but we still have to play exceptional golf tomorrow

Janzen was born in Austin, Minnesota, and spent most of his childhood in Baltimore, Maryland, where he played Little League baseball. When Janzen was 12, his father's company transferred him to Florida and his parents started him in golf and tennis, and he continued playing baseball. Janzen liked golf best and started playing that sport exclusively. He won his first tournament at age 15 as a member of the Greater Tampa Junior Golf Association.

Janzen chose to attend a small college – Florida Southern – rather than a big institution like Florida. In 1985 and 1986, Florida Southern won the Division II national team championship. Janzen was the individual medalist in 1986. He turned professional later that same year.

FULL ARTICLE AT WIKIPEDIA.ORG
This article is licensed under the GNU Free Documentation License.
It uses material from the Wikipedia article "Lee Janzen."
Back to Article
/