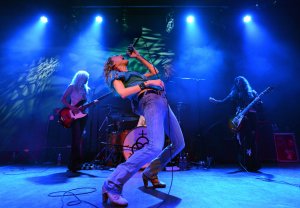 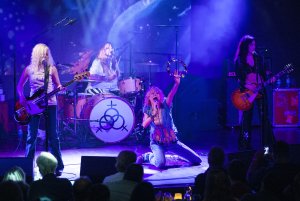 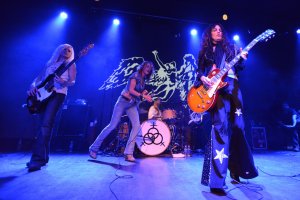 Led Zeppelin were an English rock band formed in 1968 by Jimmy Page (guitar), Robert Plant (vocals), John Paul Jones (bass guitar, keyboards) and John Bonham (drums). With their heavy, guitar-driven sound, Led Zeppelin are regarded as one of the first heavy metal bands. However, the band's individualistic style draws from many sources and transcends any one genre. Their rock-infused interpretation of the blues and folk genres also incorporated rockabilly, reggae, soul, funk, classical, Celtic, Indian, Arabic, pop, Latin and country. The band did not release the popular songs from their albums as singles in the UK, as they preferred to develop the concept of album-oriented rock.

Close to 30 years after disbanding following Bonham's death in 1980, the band continues to be held in high regard for their artistic achievements, commercial success and broad influence. The band has sold an estimated 200 million albums worldwide, including 111.5 million certified units in the United States and they have had all of their original studio albums reach the top 10 of the Billboard album chart in the U.S., with six reaching the number one spot. Led Zeppelin are ranked #1 on VH1's 100 Greatest Artists of Hard Rock. Rolling Stone magazine has described Led Zeppelin as "the heaviest band of all time" and "the biggest band of the '70s".

On 10 December 2007 the surviving members of Led Zeppelin reunited (along with deceased drummer John Bonham's son, Jason) for the Ahmet Ertegun Tribute Concert at The O2 Arena in London.

FULL ARTICLE AT WIKIPEDIA.ORG
This article is licensed under the GNU Free Documentation License.
It uses material from the Wikipedia article "Led Zeppelin."
Back to Article
/