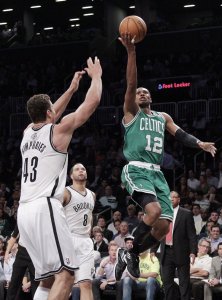 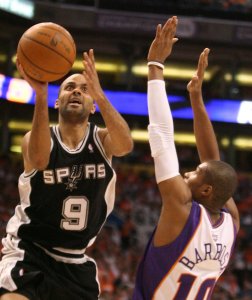 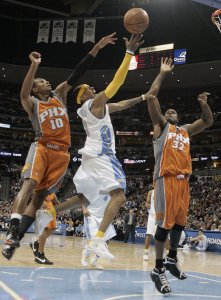 NBA // 10 months ago
Warriors, Blazers focus on charities, gaming, skills on conference finals anniversary
Golden State Warriors and Portland Trail Blazers stars are in a different place now than they were at this time in 2019, as players give basketball lessons, stream video games and raise money those impacted by COVID-19.

NBA // 4 years ago
NBA roundup: recap, scores, notes for every game played on March 15
BOSTON -- The Boston Celtics continued their mastery of the Timberwolves, overcoming a 10-point first-half deficit and cruising to a 117-104 victory over Minnesota on Wednesday night.

Sports News // 4 years ago
Eric Bledsoe, Phoenix Suns have enough left to beat Detroit Pistons
PHOENIX -- Finally, the Phoenix Suns didn't need a last-second shot or overtime to win. But they did need a fourth-quarter rally.

Leandro Mateus Barbosa (born November 28, 1982 in São Paulo, São Paulo, Brazil) is a Brazilian professional basketball player, who plays at the guard position with the Toronto Raptors in the National Basketball Association. In Brazil he is nicknamed "Leandrinho" (Little Leandro), and in the USA he is nicknamed "The Brazilian Blur", referring to the fact that he is one of the fastest players in the NBA.

Barbosa started his career at Palmeiras when he was 17. He played on Paulista (São Paulo's) Championship under the command of Lula Ferreira, the future Brazil national team coach.

At 19, he played on the principal team of Palmeiras on Paulista (São Paulo's) Championship. He averaged 14.2 points per game. After that he was traded to Tilibra/Bauru on January 2001.

FULL ARTICLE AT WIKIPEDIA.ORG
This article is licensed under the GNU Free Documentation License.
It uses material from the Wikipedia article "Leandro Barbosa."
Back to Article
/