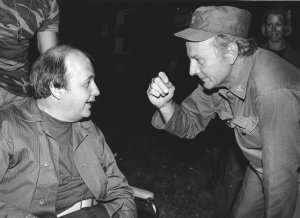 Lawrence Lavon "Larry" Linville (September 29, 1939 – April 10, 2000) was an American actor. He was known for his portrayal of obnoxious, pious, self-important and inept surgeon Major Frank Burns in the television series M*A*S*H.

In stark contrast to the belligerent, callous, mean-spirited, selfish Frank, Larry Linville himself has often been described by the show's other cast members as a kind, friendly man who was very open-minded and courteous to those around him. When the show started, Larry signed a five-year contract and was offered a renewal for two more seasons when his contract expired, but he declined. After five seasons, Larry had grown tired of playing the same negative, cartoonish antagonist, especially since during that period, the show's tone had changed from pure comedy to more drama-focused story lines. Linville also felt that he had taken the Frank Burns character as far as he could, given how M*A*S*H had developed, and decided to leave the series so that he could pursue other, more challenging roles.

Linville starred in a total of twenty-eight movies and TV shows. He guest-starred in many television shows, most frequently Murder, She Wrote; Fantasy Island (he appears as an inept genie trapped in a bottle); The Love Boat; Bonanza (He played a corrupt Frank Burns-type POW officer); Mannix; and CHiPs. He also appeared on episodes of Airwolf (he played Maxwell in "And A Child Shall Lead") and Mission: Impossible (he usually played a vicious, unfunny Frank Burns-type Gestapo secret policeman), Murder She Wrote (in which he plays a policeman who thinks Jessica Fletcher is a CIA agent), The Rockford Files (playing a petulant Frank Burns-type psychologist), and Kolchak: The Night Stalker, in which he played the youngest police captain on the force. Before appearing on M*A*S*H, Linville played a doctor on the TV Movie The Night Stalker, a predecessor of the Kolchak television series. After M*A*S*H, he played a stock character—the Crazy General—along with Edward Winter in the pilot episode of Misfits of Science. He also starred in the short-lived The Jeffersons spinoff Checking In, where he played Florence Johnston's (Marla Gibbs) nemesis, Lyle Block; however, this series only lasted four episodes. Linville co-starred in 1984 on Paper Dolls, a nighttime drama on ABC offering a glimpse behind-the-scenes of the fashion industry. In 1991, Linville appeared on an episode of the television series Night Court as a doctor. Linville also appeared in an episode of "ER" in 1994 as a medical consultant.

FULL ARTICLE AT WIKIPEDIA.ORG
This article is licensed under the GNU Free Documentation License.
It uses material from the Wikipedia article "Larry Linville."
Back to Article
/