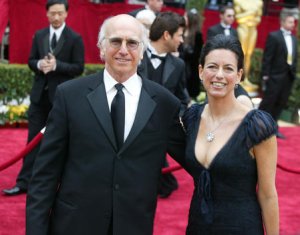 TV // 7 months ago
Second edition of 'SNL At Home' to air this weekend
A second "At Home" edition of "Saturday Night Live" is expected to air on NBC this weekend.

TV // 1 year ago
'SNL:' Stars return for parody of Democratic debate
This weekend's edition of "Saturday Night Live" featured a star-studded parody of the most recent Democratic presidential debate.

Science News // 1 year ago
'Curb Your Enthusiasm' helps study brain's sense of time
With the help of college students and the TV series "Curb Your Enthusiasm," scientists have gained a better understanding of how the brain time-stamps memories.

I'm leaning towards it, so I would say there's a good chance

For what it's worth, the only marriage I've ever broken up is my own

Lawrence Gene "Larry" David (born July 2, 1947) is an American actor, writer, comedian, and producer. He is best known as the co-creator (with Jerry Seinfeld), head writer and executive producer of the television series Seinfeld from 1989 to 1998, and for creating in 1999 the HBO series Curb Your Enthusiasm, a partially improvised sitcom in which he stars as a semi-fictionalized version of himself.

David's work won him a Primetime Emmy Award for Outstanding Comedy Series in 1993. Formerly a standup comedian, David went into television comedy, writing and starring in ABC's Fridays, as well as writing briefly for Saturday Night Live. He has won two Primetime Emmy Awards as well as being voted by fellow comedians and comedy insiders as number 23 of the greatest comedy stars ever in a British poll to select The Comedian's Comedian.

Lawrence Gene David was born to a Jewish family in the neighborhood of Sheepshead Bay in Brooklyn, New York. He graduated from Sheepshead Bay High School and then the University of Maryland, with a bachelor's degree in history (1969), and then in business (1970). After college, David enlisted in the U.S. Army Reserve.

FULL ARTICLE AT WIKIPEDIA.ORG
This article is licensed under the GNU Free Documentation License.
It uses material from the Wikipedia article "Larry David."
Back to Article
/