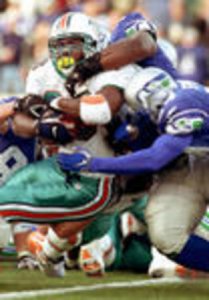 U.S. News // 2 years ago
ACLU sues St. Louis for using 'kettling' tactic amid Stockley protests
The American Civil Liberties Union filed a lawsuit against the city of St. Louis for what it described as the unconstitutional treatment of protesters.

It is critical that ICE continue to prioritize the arrests of fugitive aliens, whether or not they also happen to have criminal records

We were notified today of a determination by the U.S. Judicial Conference that impeachment proceedings against Judge Thomas Porteous may be warranted

The trainees are given access to highly sensitive information intended to help in the stabilization of Iraq. Proper screening for entry into the program and strict controls during the training are necessary to protect both our national security and our soldiers overseas

Lamar Smith (1892 – August 13, 1955) was a U.S. civil rights figure, black farmer, World War I veteran and an organizer of black voter registration. He was shot to death in broad daylight at close range on the lawn of the Lincoln County courthouse in Brookhaven, Mississippi. Some contemporary reports say there were many white witnesses, including the local sheriff, who saw a white man covered with blood leaving the scene. No witnesses would come forward and the three men who had been arrested went free.

Smith apparently had attended meetings of the Regional Council of Negro Leadership (RCNL), probably the largest civil rights organization in the state. He was also a personal friend of the RCNL's president, Dr. T.R.M. Howard of Mound Bayou, Mississippi. Smith's murder was one of several racially motivated attacks in Mississippi during 1955. The other incidents included the murder of George W. Lee, a civil rights leader in Belzoni (May), the killing of Emmett Till, a black teenager visiting from Chicago (August), and the shooting of Gus Courts (December), a civil rights associate of Lee in Belzoni. The Smith case was cited in the NAACP's pamphlet M is for Murder and Mississippi.

FULL ARTICLE AT WIKIPEDIA.ORG
This article is licensed under the GNU Free Documentation License.
It uses material from the Wikipedia article "Lamar Smith."
Back to Article
/