Entertainment News // 2 years ago
Leah Remini to serve as Cheryl Burke's maid of honor
"Dancing with the Stars" pro Cheryl Burke celebrated on Twitter after Leah Remini agreed to be part of her wedding party. 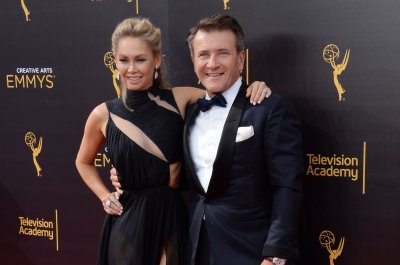 I loved working with David and he's improved so much. He's done amazing. I'm very proud of him

Kym Johnson (born 4 August 1976) is an Australian former professional ballroom dancer, model, and television celebrity. She lives in Sydney NSW, Australia but is currently based in America for Dancing with the Stars.

Johnson began dancing at the age of two. She began ballroom dancing at 13 years old. In 1998, she and her partner, Lithuanian Tomas Atkocevicius, placed second at the Australian Dancesport Championships in the Open Amateur Modern Ballroom. They also were finalists as the U.K. Ballroom Championships at Blackpool. She retired from competitive ballroom dance in 2001, but continued dancing on stage.

Since 2001, she has appeared in a number of events and films, including:

FULL ARTICLE AT WIKIPEDIA.ORG
This article is licensed under the GNU Free Documentation License.
It uses material from the Wikipedia article "Kym Johnson."
Back to Article
/