NFL // 1 year ago
NFL notebook: Flacco ailing, so Ravens QB Jackson might start
Quarterback Joe Flacco missed practice because of a right hip injury on Wednesday, the first day after Baltimore Ravens' bye week, leading to speculation that rookie Lamar Jackson might start on Sunday against the Cincinnati Bengals.

NFL // 1 year ago
Mariota, Titans face Bills in search of fourth win in row
Marcus Mariota is getting healthier and the Tennessee Titans are reaping the benefits.

NFL // 1 year ago
Bills QB Josh Allen made an impression in upset of Vikings
Josh Allen earned the first victory of his NFL career with a masterful performance in Buffalo's shocking 27-6 road victory over the Vikings.

NFL // 1 year ago
NFL notebook: Bills' QB competition altered minus McCarron
The Buffalo Bills' three-player competition to determine their starting quarterback has been reduced to two players, at least for the time being.

NFL // 1 year ago
2018 NFL Free Agent guide: Top players available in free agency
If the first two months of the 2018 NFL offseason are any indication, expect the action to be dizzying when the new league year begins on Wednesday.

NFL // 1 year ago
Buffalo Bills keeping all options on table at quarterback
Quarterback is going to continue to be at the very top of the conversation list in Buffalo until the Bills finally procure a franchise player.

NFL // 1 year ago
Free-Agent Setup: Bills appear to be in good shape
The Buffalo Bills have a total of 18 unrestricted free agents and can make the argument that only a scant few would make much of an impact on the 2018 team if they returned. 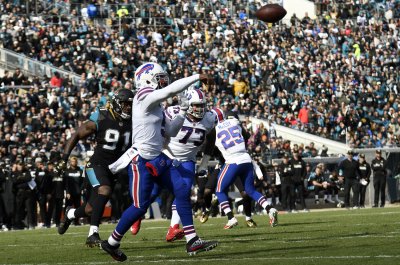 NFL // 2 years ago
Poor passing offense hampers Buffalo Bills again
The Buffalo Bills ended their 17-year playoff drought in spite of their woeful offense, and they lost the AFC wild-card game in Jacksonville because of their offense.

Kyle Williams (born June 10, 1983 in Ruston, Louisiana) is an American football defensive tackle who currently plays for the Buffalo Bills of the National Football League. He was originally drafted by the Bills in the fifth round (134th overall) of the 2006 NFL Draft. He played collegiately at Louisiana State.

FULL ARTICLE AT WIKIPEDIA.ORG
This article is licensed under the GNU Free Documentation License.
It uses material from the Wikipedia article "Kyle Williams."
Back to Article
/