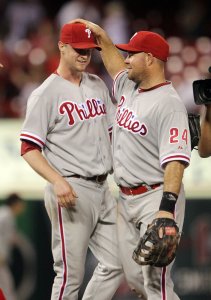 MLB // 5 years ago
Boston Red Sox beat Milwaukee Brewers on Mookie Betts' homer in ninth
Mookie Betts had done well during the Red Sox's first two games at Milwaukee this week, but had little to show for it as the Red Sox lost both those contests.

MLB // 5 years ago
Baltimore Orioles pound out 8-3 win over newfound rival Boston Red Sox
After numerous tense matchups, the heated series between the Orioles and Red Sox is finally over.

MLB // 5 years ago
Mid-spring snapshot: Spring surprises for all 30 teams
As spring training begins to wind down, teams are getting surprise performances.

Sports News // 6 years ago
MLB comeback trail: 30 revival stories to track
One year after the New York Yankees witnessed the resurrection of Alex Rodriguez's career, the team hopes to see the revival of another decorated veteran.

Kyle Rodney Kendrick (born August 26, 1984 in Houston, Texas) is a relief pitcher for the Philadelphia Phillies of Major League Baseball.

Kendrick was a three-sport standout in football, basketball, and baseball at Mount Vernon High School in Mount Vernon, Washington. Kendrick was drafted by the Phillies in the 7th round of the 2003 Major League Baseball Draft. Kendrick turned down the opportunity to delay enrollment for a year at Washington State University and then join the team as a quarterback a year behind the other QB commit that year, Alex Brink.

Kendrick was first called up to the Phillies after pitcher Freddy Garcia was placed on the DL. Kendrick singled to right field in his first major league at-bat during his first major league appearance—an afternoon game at Citizens Bank Park against the Chicago White Sox on June 13, 2007. He pitched six innings and gave up three runs.

FULL ARTICLE AT WIKIPEDIA.ORG
This article is licensed under the GNU Free Documentation License.
It uses material from the Wikipedia article "Kyle Kendrick."