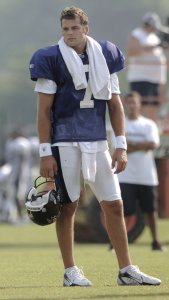 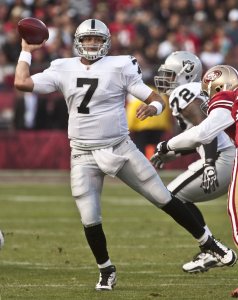 NFL // 1 year ago
Just another challenge for Redskins QB Alex Smith
Few, if any, NFL quarterbacks faced the myriad of challenges confronted by Alexander Douglas Smith. 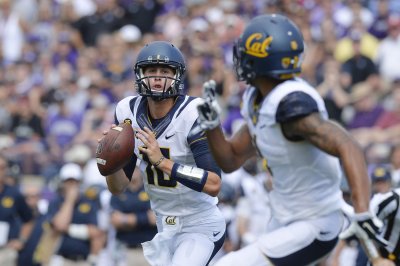 College Football // 5 years ago
Cal football: Golden Bears face Utah Utes, begin brutal scheduling stretch
BERKELEY, Calif. -- California has rallied from big deficits and held on after blowing big leads. There is a growing belief in Berkeley that the 23rd-ranked Golden Bears will find a way to win no matter what the circumstances, and they're about to find out if they can do it against stiffer competition.
Sports News // 9 years ago
NFL: Kansas City 28, Oakland 0
Kendrick Lewis and Brandon Flowers returned interceptions for touchdowns Sunday, keying the Kansas City Chiefs' 28-0 romp over Oakland.
Sports News // 9 years ago
Report: Boller to start for Raiders
Kyle Boller will start for Oakland Sunday instead of Carson Palmer, who came to the Raiders this week in a trade with Cincinnati, the NFL Network said.
Sports News // 9 years ago
Bengals trade QB Palmer to Oakland
The Oakland Raiders acquired quarterback Carson Palmer in a trade with the Cincinnati Bengals Tuesday, the teams announced.
Sports News // 9 years ago
Raiders' Campbell hopes for 2011 return
Oakland quarterback Jason Campbell, facing surgery Monday for a broken right clavicle, has expressed hope he can return to action this season.
Sports News // 9 years ago
NFL: Oakland 24, Cleveland 17
A 101-yard kickoff return by Jacoby Ford and a touchdown pass by punter Shane Lechler Sunday lifted Oakland to a 24-17 victory over Cleveland.
Sports News // 1 decade ago
NFL: Oakland 32, Chicago 17
Oakland quarterbacks Jason Campbell and Kyle Boller both ran for touchdowns Saturday as the Raiders rolled to a 32-17 exhibition victory over Chicago.
Entertainment News // 1 decade ago
Carrie Prejean marries NFL quarterback
Model and one-time beauty queen Carrie Prejean, known as a foe of same-sex marriage, has tied the knot with Oakland Raiders quarterback Kyle Boller.
Entertainment News // 1 decade ago
Prejean and Boller get engaged
Former Miss California Carrie Prejean has gotten engaged to St. Louis Rams quarterback Kyle Boller, a source told E! News.

Kyle Bryan Boller (born June 17, 1981 in Burbank, California) is an American football quarterback for the Oakland Raiders of National Football League. He was drafted by the Baltimore Ravens in the first round of the 2003 NFL Draft. He played college football at The University of California.

Boller has also played for the St. Louis Rams.

Boller earned the 1998 California State Player of the Year honors after an outstanding senior season at William S. Hart High School in Santa Clarita, CA. He led Hart to the CIF Southern Section Division III title with a 13–1 record. He passed for California prep record of 4,838 yards and threw for 59 TDs, the 2nd-best mark in California prep history, and ended the season completing 290 of 454 passes (63.9%). Because of this, he was considered by many to be the best prospect to emerge from The Valley Region of Los Angeles since John Elway came out of Granada Hills High School in 1979. During the 1998 season, Boller also played the position of safety on defense, and intercepted a pass in the final minute of the sectional championship game. He was rated the number one QB prospect in the nation by PrepStar and was that publication's national Offensive Co-Player of the Year.

FULL ARTICLE AT WIKIPEDIA.ORG
This article is licensed under the GNU Free Documentation License.
It uses material from the Wikipedia article "Kyle Boller."
Back to Article
/