NHL // 3 years ago
Calgary Flames jump out early to beat New York Islanders
CALGARY, Alberta -- The Calgary Flames are hitting their stride at the right time of the season.

NHL // 3 years ago
NHL roundup: recap, scores, notes for every game played on February 7
WASHINGTON -- Braden Holtby picked up his seventh shutout of the season, five different players scored and the Washington Capitals defeated the Carolina Hurricanes 5-0 on Tuesday night for their 10th straight home win.

NHL // 3 years ago
Mikael Backlund fuels Calgary Flames to OT win over New Jersey Devils
NEWARK, N.J. -- While the Calgary Flames found a way to rally for an important 4-3 overtime victory on the road Friday night, the New Jersey Devils continued their recent misery on home ice losing for the seventh consecutive time at the Prudential Center. 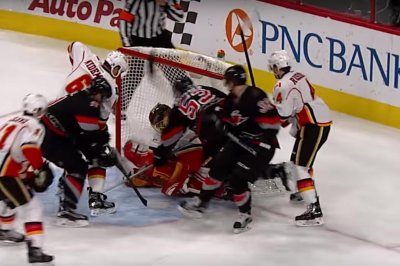 Kris Versteeg (born May 13, 1986) is a Canadian professional ice hockey winger currently on contract to play for the Philadelphia Flyers of the National Hockey League (NHL). Originally selected 134th overall in the 2004 NHL Entry Draft by the Boston Bruins, he played with club's minor league affiliate, the Providence Bruins of the American Hockey League (AHL) for parts of two seasons before being traded to the Chicago Blackhawks. Versteeg continued playing in the AHL with the Blackhawks' affiliates until making his NHL debut during the 2007–08 season. The following campaign, he received a nomination for the Calder Memorial Trophy as the NHL's best rookie. In his second full season with the Blackhawks, he helped the club win the Stanley Cup in 2010. During the subsequent off-season, he was traded to the Toronto Maple Leafs, with whom he spent the majority of one season before being dealt once more to the Philadelphia Flyers in February 2011.

Versteeg was drafted 134th overall in the 2004 NHL Entry Draft by the Boston Bruins. After a four-year Western Hockey League (WHL) career (spanning from 2002–03 to 2005–06 and spent with the Lethbridge Hurricanes, Kamloops Blazers and Red Deer Rebels) During his time with the Lethbridge Hurricanes, he played with future Chicago Blackhawks teammate Brent Seabrook for three seasons. Versteeg made his professional debut, playing in the final 13 games of the 2005–06 season with Boston's American Hockey League (AHL) affiliate, the Providence Bruins.

He remained with Providence for the beginning of 2006–07 before being traded by Boston on February 3, 2007, along with a conditional draft pick, to the Chicago Blackhawks for Brandon Bochenski. As a result, he moved within the AHL to Chicago's minor league affiliate, the Norfolk Admirals. Versteeg then played for the Rockford IceHogs in 2007–08, as Chicago switched its AHL affiliation. He made his NHL debut that season as he was called up for a total of 13 games, recording 2 goals and 2 assists.

FULL ARTICLE AT WIKIPEDIA.ORG
This article is licensed under the GNU Free Documentation License.
It uses material from the Wikipedia article "Kris Versteeg."
Back to Article
/