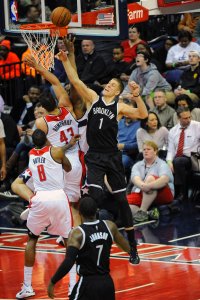 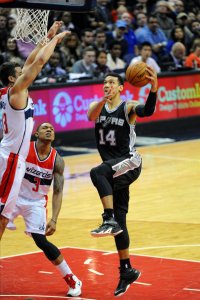 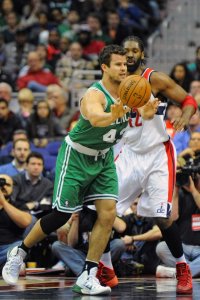 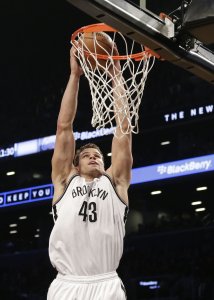 NBA // 5 years ago
Paul Millsap powers Atlanta Hawks past Boston Celtics
ATLANTA -- A rash of untimely injuries placed Atlanta's postseason prospects in a freefall. And when the Hawks needed someone to stop the collapse, they called upon their returning All-Star.

NBA // 5 years ago
Dennis Schroder's late 3 lifts Atlanta Hawks over New York Knicks
NEW YORK -- It will appear in the box score as Kris Humphries' only assist in the Atlanta Hawks' 108-107 win.

Humphries was born in Minneapolis to Debra Humphries and William Humphries, a former football player for the University of Minnesota. Humphries also has two older sisters, Krystal and Kaela. His first success in sports came in competitive swimming, where he was the top 10 year old in the nation in 6 events, second only to a young Michael Phelps in the remaining events. Kris Humphries still holds the USS national record for the 50M freestyle for 10 and under boys. At age 12 he gave up swimming to pursue a promising career in basketball.

Humphries attended Hopkins High School, where he enjoyed an impressive basketball career. In 2002 he led them to a 25–2 record and its first Minnesota state championship in 49 years. He was subsequently named a 2003 McDonald's All-American and named Second Team All-USA by USA Today. He was also named to the Super 25 Basketball Team by USA Today, named Minnesota Mr. Basketball, and state player of the year by the Minneapolis Star Tribune and College Basketball News. He was one of 10 finalists for the 2003 Naismith Prep Player of the Year Award, averaging a double double in his final three seasons, averaging 25.7 points, 11.4 rebounds and 5.0 assists a game as a senior.

FULL ARTICLE AT WIKIPEDIA.ORG
This article is licensed under the GNU Free Documentation License.
It uses material from the Wikipedia article "Kris Humphries."