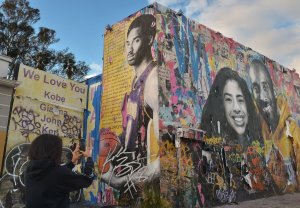 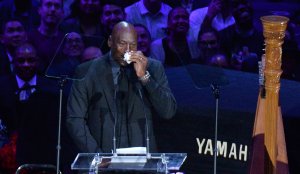 NBA // 1 week ago
Kyrie Irving says he 'would've won' more titles with Cavs, LeBron; cites maturity
Brooklyn Nets guard Kyrie Irving says he would have won more championships with LeBron James and the Cleveland Cavaliers if he had the "same maturity line" and understanding of himself he does now.

NBA // 4 months ago
Statue of Kobe Bryant, daughter Gianna erected at site of 2020 helicopter crash
A statue of late Los Angeles Lakers great Kobe Bryant and his daughter, Gianna, was placed at the site of their helicopter crash in Calabasas, Calif., on Wednesday, two years to the day of their deaths and seven others.

NFL // 4 months ago
Buccaneers' Tom Brady hints at retirement, wants to spend more time with family
Tampa Bay Buccaneers star quarterback Tom Brady opened up about his future in the NFL on Monday, indicating that family will play a significant role in determining whether he will retire or play next season.

My current thinking is to give my finger some treatment and rest for a few days, and hope I can still continue to compete at a high level after that rest

What I said is what I said. Everybody knows that we need to make some adjustments and need to get better

Kobe Bean Bryant (born August 23, 1978) is an American professional basketball player who plays shooting guard for the Los Angeles Lakers of the National Basketball Association (NBA). Bryant enjoyed a successful high school basketball career at Lower Merion High School, where he was recognized as the top high school basketball player in the country. He decided to declare his eligibility for the NBA Draft upon graduation, and was selected with the 13th overall pick in the 1996 NBA Draft by the Charlotte Hornets, then traded to the Los Angeles Lakers. As a rookie, Bryant earned himself a reputation as a high-flyer and a fan favorite by winning the 1997 Slam Dunk Contest.

Bryant and Shaquille O'Neal led the Lakers to three consecutive NBA championships from 2000 to 2002. A heated feud between the duo and a loss in the 2004 NBA Finals was followed by O'Neal's trade from the Lakers after the 2003–04 season. In 2003, Bryant was accused of sexual assault after having sex with a hotel employee in Colorado. In September 2004, prosecutors dropped the case after his accuser refused to testify, and Bryant had to rebuild his image while becoming the cornerstone of the Lakers franchise. He led the NBA in scoring during the 2005–06 and 2006–07 seasons, setting numerous scoring records in the process. In 2006, Bryant scored a career-high 81 points against the Toronto Raptors, the second most points scored in a single game in NBA history, second only to Wilt Chamberlain's 100 point performance in 1962. In the 2007–08 season, he was awarded the regular season's Most Valuable Player Award (MVP). After losing in the 2008 NBA Finals, Bryant led the Lakers to two consecutive championships in 2009 and 2010 and was named NBA Finals MVP on both occasions.

As of July 2011, Bryant ranks third and sixth on the league's all-time post-season scoring and all-time regular season scoring lists, respectively. He is also the all-time leading scorer in Lakers franchise history. Since his second year in the league, Bryant has started in every NBA All-Star Game that has been held with thirteen All-Star appearances, winning the All-Star MVP Award four times (2002, 2007, 2009, and 2011). Bryant is tied for the most All Star MVP Awards in NBA History. He is a thirteen-time member of the All-NBA team and eleven-time All-Defensive team, and is the youngest player ever to receive defensive honors. At the 2008 Olympics, he won a gold medal as a member of the USA national team. In 2009, Sporting News and TNT named Bryant the NBA player of the 2000s decade.

FULL ARTICLE AT WIKIPEDIA.ORG
This article is licensed under the GNU Free Documentation License.
It uses material from the Wikipedia article "Kobe Bryant."