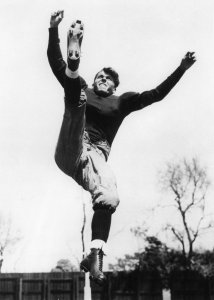 Top News // 3 years ago
The Almanac
On May 23, 2009, police said South Korean President Roh Moo-hyun, 62, linked to a corruption investigation, died in a leap from a cliff near his home after leaving a suicide note.

College Basketball // 4 years ago
2018 March Madness: Auburn Tigers clash with Clemson
The way Auburn coach Bruce Pearl sees it, this NCAA Tournament appearance is not only about his team but also about the SEC.

Top News // 5 years ago
The Almanac
On March 4, 1917, Jeanette Rankin, a Montana Republican, was sworn in as a member of the House of Representatives. She was the first woman to serve in Congress.

Knute Kenneth Rockne (March 4, 1888 – March 31, 1931) was an American football player and is regarded as one of the greatest coaches in college football history. His biography at the College Football Hall of Fame calls him "American football's most-renowned coach." He was a native Norwegian and was trained as a chemist at the University of Notre Dame, where he later coached. He is credited with popularizing the use of the forward pass.

Knute Rockne was born Knut Larsen Rokne in Voss, Norway to the smith and wagonmaker Lars Knutson Rokne (1858–1912) and his wife Martha Pedersdatter Gjermo (1859–1944). He emigrated with his parents at five years old to Chicago. He grew up in the Logan Square area of Chicago, on the northwest side of the city. Rockne learned to play football in his neighborhood and later played end in a local group called the Logan Square Tigers. He attended North West Division High School in Chicago playing football and also running track.

After Rockne graduated from high school, he took a job as a mail dispatcher with the Chicago Post Office for four years. When he was 22, he had saved enough money to continue his education. He headed to South Bend, Indiana, to finish his schooling. He graduated from Notre Dame in 1914 with a degree in pharmacy. After graduating he was the laboratory assistant to noted polymer chemist Julius Arthur Nieuwland at Notre Dame and helped out with the football team, but rejected further work in chemistry after receiving an offer to coach football.

FULL ARTICLE AT WIKIPEDIA.ORG
This article is licensed under the GNU Free Documentation License.
It uses material from the Wikipedia article "Knute Rockne."