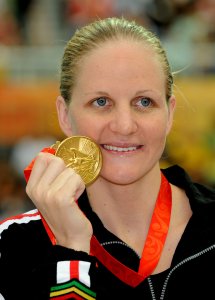 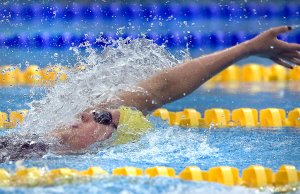 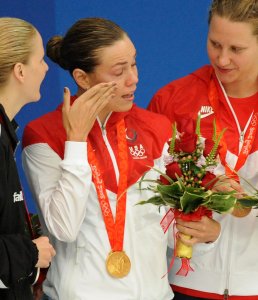 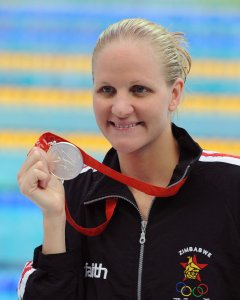 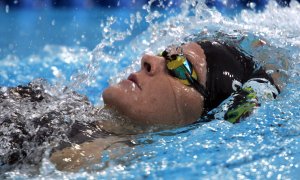 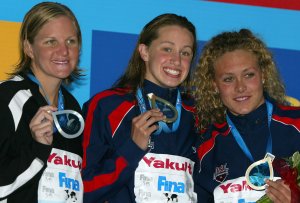 Kirsty Leigh Coventry (born September 16, 1983 in Harare, Zimbabwe) is a Zimbabwean swimmer and world record holder. She attended and swam competitively for Auburn University in Alabama, in the United States. At the 2004 Summer Olympics, in Athens, Greece, Coventry won three Olympic medals: a gold, a silver, and a bronze and in the 2008 Summer Olympics in Beijing she won four medals: a gold and three silver. She was subsequently described by Paul Chingoka, head of the Zimbabwe Olympic Committee, as "our national treasure". Zimbabwean President Robert Mugabe has called her "a golden girl," and awarded her US$100,000 in cash for her 2008 Olympic performance.

Coventry attended Dominican Convent High School in Zimbabwe. In 2000, while still in high school, Coventry became the first Zimbabwean swimmer to reach the semifinals at the Olympics and was named Zimbabwe's Sports Woman of the Year.

As a student at Auburn University, Coventry helped lead the Tigers to NCAA Championships in 2003 and 2004. In 2005, she was the top individual scorer at the NCAA Championships and captured three individual titles including the 200 m and 400 m individual medley (IM), and the 200 m backstroke for the second consecutive season. She was named the College Swimming Coaches Association Swimmer of the Meet for her efforts. Other awards include 2005 SEC Swimmer of the Year, the 2004-2005 SEC Female Athlete of the Year, and the 2005 Honda Award Winner for Swimming.

FULL ARTICLE AT WIKIPEDIA.ORG
This article is licensed under the GNU Free Documentation License.
It uses material from the Wikipedia article "Kirsty Coventry."