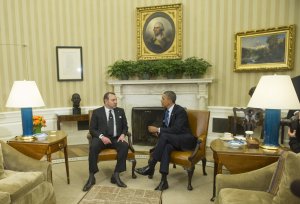 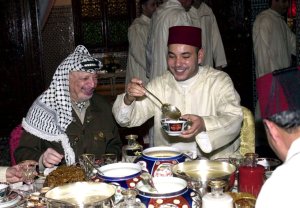 World News // 4 years ago
At least 15 killed in Morocco food stampede
At least 15 people were killed during a stampede at a food distribution event in Morocco on Sunday.

World News // 6 years ago
Morocco to return to African Union 'family' after leaving 32 years ago
Morocco formally announced its intention to return to the African Union after leaving the organization more than three decades ago.
U.S. News // 8 years ago
Obama schedule for Friday, Nov. 22
President Obama meets with King Mohammed VI of Morocco at the White House Friday, the daily schedule indicated.
World News // 9 years ago
Spanish police arrest pedophile mistakenly pardoned in Morocco
Police in Spain arrested Daniel Galvan Vina, a convicted pedophile who had mistakenly been pardoned by the king of Morocco, Interior Ministry officials said.
World News // 9 years ago
Moroccan king revokes pardon of Spanish pedophile
Moroccon King Mohammed VI revoked the pardon of a convicted Spanish pedophile whose release sparked protests, the royal office said.
World News // 9 years ago
Morocco to release 48 jailed Spaniards
Moroccan King Mohammed VI has agreed to release 48 Spaniards from prison at the request of Spanish King Juan Carlos, officials said.
World News // 9 years ago
Moroccan student remains jailed for insulting king
Human rights workers are calling on the Moroccan government to free a student jailed for deprecating comments he made about the king that were put online.
Special Reports // 9 years ago
Qatar succession and the gulf's aging monarchies
The handover of power by the emir of Qatar to his 33-year-old son is a rare occurrence among the Persian Gulf's aging ruler-for-life monarchs, but it could show them the way to go as they grapple with the turmoil of the Arab Spring that toppled four seemingly unassailable Arab leaders.

Mohammed VI, (Arabic: محمد السادس‎) (born 21 August 1963) is the present King of Morocco and self-appointed Amir al-Mu'minin (commander of the faithful). He ascended to the throne on 23 July 1999 upon the death of his father.

On the day of his birth, he was appointed Heir Apparent and Crown Prince. His father, King Hassan II, was keen on giving him a religious and political education from an early age. At the age of four, he started attending the Qur'anic school at the Royal Palace, and received a religious and traditional education.

After primary and secondary studies at the Royal College and after he received his Baccalaureate in 1981, Mohammed obtained in 1985 a Bachelor's degree in law at the College of law of the Mohammed V University at Agdal in Rabat. His research paper dealt with "the Arab-African Union and the Strategy of the Kingdom of Morocco in matters of International Relations". He has also frequented the Imperial College and University of Rabat. In the same year of 1985 he was appointed President of the Pan Arab Games and commissioned Colonel Major of the Royal Moroccan Army on 26 November, and Coordinator of the Offices and Services of the Royal Armed Forces until 1994.

FULL ARTICLE AT WIKIPEDIA.ORG
This article is licensed under the GNU Free Documentation License.
It uses material from the Wikipedia article "King Mohammed VI."