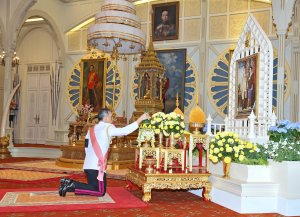 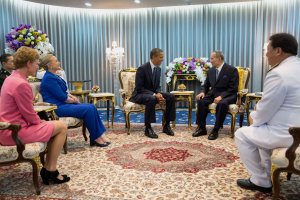 World News // 1 year ago
Thailand crowns king for first time in 69 years
The Saturday coronation of Maha Vajiralongkorn is the first time anyone has sat on the throne since his father, King Bhumibol Adulyadej, died in 2016 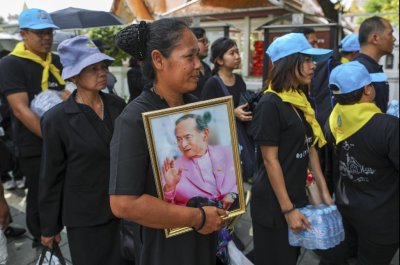 World News // 2 years ago
Thousands crowd Bangkok in run-up to King Bhumibol cremation
Thousands of mourners gathered Wednesday to honor the country's former King Bhumibol Adulyadej, as part of a five-day run-up to his cremation ceremony.

World News // 3 years ago
Caretaker monarch in place after death of Thai King Bhumibol
Crown Prince Maha Vajiralongkorn of Thailand said he will not immediately ascend to the throne after the death of his father, King Bhumibol on Thursday.

World News // 3 years ago
Thailand's king hospitalized, condition 'not stable'
The king of Thailand was hospitalized with blood flow to the left side of his heart reduced, his condition called unstable by palace officials. 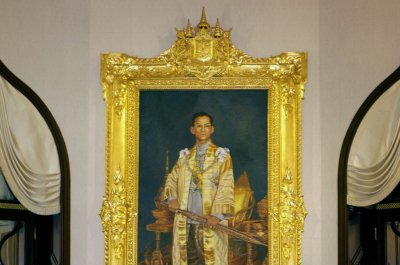 World News // 5 years ago
King of Thailand cancels 87th birthday celebration
Thailand's King Bhumibol Adulyadej, who has not been seen publicly since November, was a no-show for his 87th birthday celebration on Friday.
Blog // 6 years ago
In wake of protests, revered Thai king's birthday wish: unity for his country
In the wake of weeks of protests in Bangkok, Thailand's King Bhumibol Adulyadej, celebrating his 86th birthday, urged his countrymen to unite for the broader good during a birthday speech delivered earlier today.

Whether soldiers or civilians, (we) must be united, like our legs that must be united -- which means one goes forward and one pushes back before moving forward

Bhumibol Adulyadej (Royal Institute: Phumiphon Adunyadet; Thai: ภูมิพลอดุลยเดช, pronounced   ( listen); see full title below; born 5 December 1927) is the current King of Thailand. He is known as Rama IX (and within the Thai royal family and to close associates simply as Lek). Having reigned since 9 June 1946, he is the world's longest-serving current head of state and the longest-reigning monarch in Thai history. He was admitted to Siriraj Hospital in September 2009 for flu and pneumonia and has been confined there since. Rumors about his ill-health caused Thai financial markets to tumble in October 2009.

Although Bhumibol is legally a constitutional monarch, he has made several decisive interventions in Thai politics. He was credited with facilitating Thailand's transition to democracy in the 1990s, although he has supported numerous military regimes, including Sarit Dhanarajata's during the 1960s and the Council for National Security in 2006-2008. During his long reign he has seen over 15 coups, 16 constitutions, and 27 changes of prime ministers. He has also used his influence to stop military coups, including attempts in 1981 and 1985.

Bhumibol is revered by many Thais, despite what the Thai government claims are serious threats to overthrow the monarchy. Bhumibol is legally considered "inviolable", and insults, claims that he is involved in politics, and criticism of him can result in three to fifteen years in jail, though he claimed in his 2005 birthday speech that he would not take lèse majesté seriously.

FULL ARTICLE AT WIKIPEDIA.ORG
This article is licensed under the GNU Free Documentation License.
It uses material from the Wikipedia article "King Bhumibol Adulyadej."
Back to Article
/