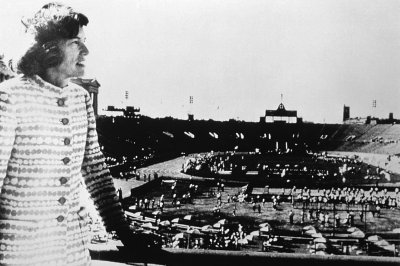 Top News // 4 years ago
The Almanac
On July 20, 1969, Apollo 11 astronauts Neil Armstrong and Edwin "Buzz" Aldrin became the first men to set foot on the moon -- Armstrong first and Aldrin about 20 minutes later.

It was a challenge to record such a well-known, classic song, but I think we did a pretty good job

Kim Carnes (born July 20, 1945 Hollywood, California) is a American singer-songwriter. She is a two-time Grammy Award winner noted for her distinctive raspy vocal style. Some people have called her "The Female Rod Stewart" due to her raspy voice.

After writing songs for many years, Kim Carnes signed her first publishing deal in 1969 with famed producer Jimmy Bowen. During this period, she shared demo-recording time with Bowen's other writers, including Don Henley, Glenn Frey, and J.D. Souther. Carnes also sang "Nobody Knows", written by Mike Settle, which was featured in the end credits of the 1971 film, Vanishing Point. The film also featured Carnes's first selection as a songwriter, "Sing Out for Jesus", which was recorded by Willie Mae "Big Mama" Thornton.

Her first album, Rest on Me, produced by Jimmy Bowen, was released in 1972. Her self-titled album in 1975 contained her first charted hit, "You're a Part Of Me" (No. 32 AC). This album was followed in 1976 by Sailin', produced by the legendary Jerry Wexler. One selection, "Love Comes from Unexpected Places", won Best Composition at the 1977 American Song Festival and gained additional notice after it was recorded by Barbra Streisand on her 1977 album Streisand Superman. Streisand also recorded Carnes's "Stay Away" on her 1978 album Songbird. In spite of Streisand's endorsement of her material, Carnes's own Top 40 breakthrough did not occur till 1978, when Gene Cotton recruited her to record a duet version of "You're a Part of Me", which reached No. 36 on the Billboard Hot 100. In 1979, she recorded a single using the pseudonym Connie con Carne titled "She Dances With Meat."

FULL ARTICLE AT WIKIPEDIA.ORG
This article is licensed under the GNU Free Documentation License.
It uses material from the Wikipedia article "Kim Carnes."
Back to Article
/