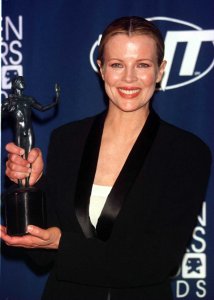 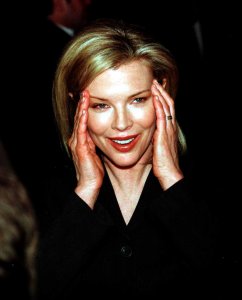 Following her role as a Bond girl in Never Say Never Again (1983), Basinger received a Golden Globe nomination for her work in The Natural (1984). She won an Academy Award, Golden Globe, and Screen Actors Guild Award as best supporting actress for her performance in L.A. Confidential (1997). Her film work includes major roles in Batman (1989) and 8 Mile (2002).

Basinger was born in Athens, Georgia. Her father, Don Basinger, was a big band musician and loan manager who landed in Normandy on D-Day. Her mother, Ann, was a model, actress, and swimmer who appeared in Esther Williams films. The third of five children, she has two brothers, Mick and Skip, and two sisters, Ashley and Barbara. Basinger has German, Swedish and Cherokee ancestry and was raised Methodist.

FULL ARTICLE AT WIKIPEDIA.ORG
This article is licensed under the GNU Free Documentation License.
It uses material from the Wikipedia article "Kim Basinger."
Back to Article
/