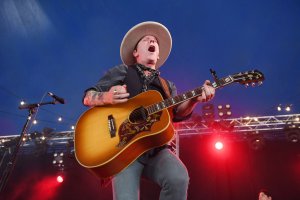 Entertainment News // 4 months ago
What to stream this weekend: Lizzo hosts 'SNL,' 'The First Lady'
"Saturday Night Live" with Lizzo, "Outer Range," "The First Lady," Bill Maher's "#Adulting," and "Swimming with Sharks" are some of the entertainment options streaming this weekend.

Movies // 10 months ago
'Lost Boys' remake in the works with Noah Jupe, Jaeden Martell set to star
"A Quiet Place" actor Noah Jupe and "It" star Jaeden Martell have signed on for roles in Warner Bros.' planned remake of the 1987 teen vampire classic "The Lost Boys."

I have to say, riding the subway would be easier than what I'm going through right now. This, I think, may be the most humiliating moment of my life, and I've had a couple to choose from

I lost a bet. Over the weekend, I was so sure New England was gonna win that I told a guy who used to be my friend that if New England lost, I would wear a dress on 'Letterman.

I am sorry about what happened that night and sincerely regret that Mr. McCollough was injured

Kiefer William Frederick Dempsey George Rufus Sutherland was born in London, England, the son of Donald Sutherland and Shirley Douglas, both of whom are successful Canadian actors. He has Scottish ancestry from both parents, and is the grandson of Canadian politician Tommy Douglas, widely credited for bringing universal health care to Canada. Sutherland and his twin sister, Rachel, were born in London (in Saint Mary's Hospital) while his parents were working there.

He received his first given name from Warren Kiefer, the Italian director who gave his father his first movie role.

FULL ARTICLE AT WIKIPEDIA.ORG
This article is licensed under the GNU Free Documentation License.
It uses material from the Wikipedia article "Kiefer Sutherland."