Music // 1 year ago
The Muffs frontwoman Kim Shattuck dead at 56
Kim Shattuck, frontwoman of punk band the Muffs and one-time member of indie group Pixies, has died after a two-year battle with amyotrophic lateral sclerosis, better known as ALS. She was 56. 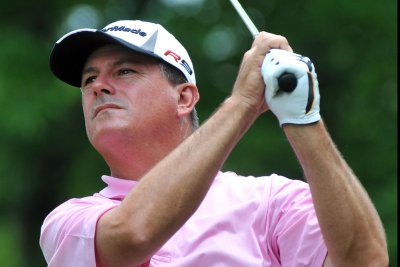 Golf // 3 years ago
John Daly ends 13-year title drought with PGA Tour Champions victory
Having gone 13 years without a victory, John Daly could be excused for wondering if he would ever again win a tournament.

Sports News // 5 years ago
Tom Watson leads Senior Open by 1
Tom Watson nearly shot his age on Thursday as he opened with a 4-under 66 at the U.S. Senior Open Championship and was one stroke clear of six players.
Sports News // 9 years ago
Beem, Sutherland among Texas Open leaders
Rich Beem and Kevin Sutherland both carded a 2-under 70 Friday, registering the best days among seven players tied for the Texas Open lead after two rounds.

You're not going to shoot 65s very often, so it was a lot of fun

That's one of the fantastic things about Muirfield, which isn't always the case in a lot of other links courses that we play

On any given day, anybody can beat anybody, and I think that's been proven in this tournament

Sutherland was born in Sacramento, California and graduated from Christian Brothers High School. He attended Fresno State University and made the golf team as a walk-on freshman. Teased by his teammates for his unorthodox swing and unusual grip, he silenced his peers as he gained All-American status twice in his four years at Fresno State and became the most successful player ever to have spent time there. His younger brother David also attended Fresno while Kevin was there and followed in his brother's footsteps as an All-American golfer.

As a professional, Sutherland qualified for the PGA Tour in 1992 and has been a regular ever since. He won the WGC-Accenture Match Play Championship in 2002. Sutherland has played very consistent golf throughout his whole career, and it is very surprising that he hasn't won more tournaments, but he had an exceptional 2008 season, a season which included 6 top ten finishes, including a playoff loss to Vijay Singh at the 2008 Barclays, and a playoff loss ot Cameron Beckman at the 2008 Frys.com Open at the Greyhawk Golf Club in Scottsdale, Arizona. This runner-up finish vaulted Sutherland well inside the top thirty on the 2008 PGA Tour money list, and secured him a spot in the 2009 Masters Tournament.

FULL ARTICLE AT WIKIPEDIA.ORG
This article is licensed under the GNU Free Documentation License.
It uses material from the Wikipedia article "Kevin Sutherland."
Back to Article
/