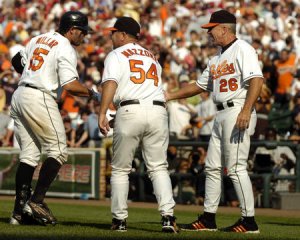 MLB // 2 years ago
David Ortiz's ex-teammates show support after former MLB star's shooting
The Major League Baseball community is showing support for former Boston Red Sox star David Ortiz, who was shot in the back in the Dominican Republic on Sunday night.

Sports News // 5 years ago
Chicago Cubs could be latest to break title drought
This baseball season may bring us the end of the mother of all championship droughts. The Chicago Cubs last won a World Series in 1908. This season's edition has been the best team in baseball.

Kevin Charles Millar (born September 24, 1971 in Los Angeles, California) is a Major League Baseball first baseman for the Toronto Blue Jays. Millar played college baseball at Lamar University in Beaumont, Texas, where he continues to reside in the off-season. Millar is the nephew of former major league outfielder Wayne Nordhagen.

In 1993, Millar began his professional career with the Saint Paul Saints of the Northern League.

FULL ARTICLE AT WIKIPEDIA.ORG
This article is licensed under the GNU Free Documentation License.
It uses material from the Wikipedia article "Kevin Millar."
Back to Article
/