MLB // 1 year ago
A's hope to keep momentum going vs. Rangers
The Achilles' heel for the Texas Rangers through the first month of the 2018 season has been relief pitching.

Sports News // 3 years ago
Minnesota Twins start game with two homers in 7-5 win
MINNEAPOLIS -- Struggling in all aspects of their game, the Minnesota Twins got it right offensively against the Kansas City Royals on Wednesday afternoon.

Sports News // 3 years ago
Minnesota Twins halt two-week skid, win 6-3
CLEVELAND -- All bad things must come to an end, and a real bad one ended for the Minnesota Twins Saturday at Progressive Field. 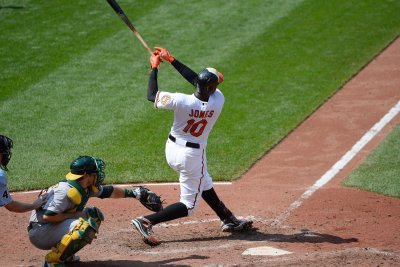 Sports News // 3 years ago
Adam Jones' ninth-inning single lifts Baltimore Orioles past Minnesota Twins
MINNEAPOLIS -- An early season slump has caused the Baltimore Orioles to put in plenty of extra work to try and find a way out.

Sports News // 3 years ago
Deja vu: Another walk-off win for Minnesota Twins
MINNEAPOLIS -- The Minnesota Twins came up with yet another clutch hit in the bottom of the ninth inning Tuesday at Target Field.

Kevin Martin Jepsen (born July 26, 1984 in Anaheim, California) is an Major League Baseball right-handed pitcher for the Los Angeles Angels of Anaheim. He is 6'3", 215 lbs. and was selected by the Angels in the 2nd round (53rd overall) in the 2002 Major League Baseball Draft out of Bishop Manogue (Reno, Nevada) High School.

Jepsen made his major league debut against the New York Yankees on September 8, 2008, at Angel Stadium in Anaheim, California. He pitched one inning in a blowout game, retiring Derek Jeter, Bobby Abreu, and Alex Rodriguez in order. Jepsen pitched in 9 games for the Angels in the 2008 season.

Jepsen earned his first All-Star selection in the minor leagues, and was enjoying his finest season to date with a combiled 3-4 record, 13 saves, a 1.87 earned run average and 55 strikeouts for the Arkansas Travelers and Salt Lake Bees when he was selected to play for the United States national baseball team at the 2008 Summer Olympics. He and his team won a bronze medal.

FULL ARTICLE AT WIKIPEDIA.ORG
This article is licensed under the GNU Free Documentation License.
It uses material from the Wikipedia article "Kevin Jepsen."
Back to Article
/