Sports News // 5 years ago
Cincinnati Reds start road slate at Wrigley
The Cincinnati Reds hit the road for the first time this season on Monday when they take on the Chicago Cubs at Wrigley Field for the opener of a three-game series between National League Central rivals. 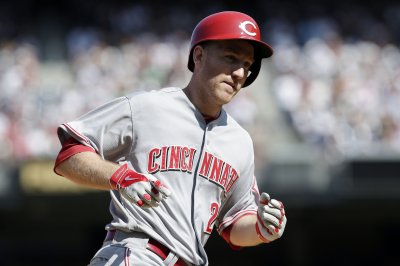 Gregg was drafted in the 15th round of the 1996 Major League Baseball Draft (435th overall) by the Oakland Athletics. He spent several years in the A's minor league system as a starter up until 2002. On October 15, 2002, he was granted free agency and signed as a free agent with the Anaheim Angels on November 20, 2002.

FULL ARTICLE AT WIKIPEDIA.ORG
This article is licensed under the GNU Free Documentation License.
It uses material from the Wikipedia article "Kevin Gregg."
Back to Article
/