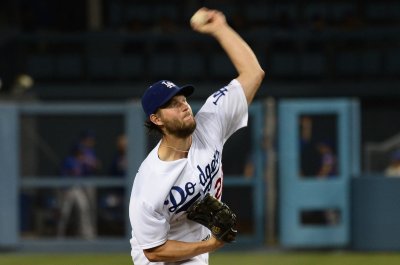 MLB // 3 years ago
Los Angeles Dodgers ace Clayton Kershaw beats Kansas City Royals for 14th win
Comparing the efforts of Clayton Kershaw is a bit like being a judge at a beauty contest.

Danley was the first base umpire for the game between the San Francisco Giants and the San Diego Padres on August 4, 2007. In the top of the second inning at San Diego, Barry Bonds of the Giants hit his 755th career home run off Clay Hensley, tying Hank Aaron for first all-time.

On April 26, 2008, Danley was behind home plate umpiring a game between the Los Angeles Dodgers and the Colorado Rockies when he was hit in the jaw by a 96 mph Brad Penny fastball that went over the head of catcher Russell Martin. Danley was carried off the field in an ambulance, but play eventually resumed. During the sixth inning, Vin Scully reported that Danley was doing well. Danley was released from the hospital at early the next morning and returned to the field in early June.

FULL ARTICLE AT WIKIPEDIA.ORG
This article is licensed under the GNU Free Documentation License.
It uses material from the Wikipedia article "Kerwin Danley."
Back to Article
/