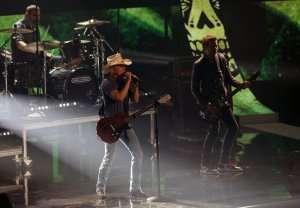 Music // 1 month ago
CMT Music Awards: How to watch, what to expect
The 56th annual CMT Music Awards will air live Monday from the Municipal Auditorium in Nashville.

Entertainment News // 6 months ago
Chris Stapleton dominates 2021 CMA Awards
Chris Stapleton, who entered the night tied in the lead for nominations, dominated the 2021 Country Music Association Awards on Wednesday, winning top prizes including Album of the Year and Male Vocalist of the Year.

Entertainment News // 6 months ago
CMA Awards: How to watch, what to expect
The 55th annual Country Music Association Awards will air live Wednesday from the Bridgestone Arena in Nashville.

Music // 6 months ago
Kenny Chesney to launch 'Here and Now' tour in April 2022
Kenny Chesney will perform on a new stadium tour with Dan + Shay, Old Dominion and Carly Pearce as opening acts.

Entertainment News // 11 months ago
CMT Music Awards: How to watch, what to expect
The CMT Music Awards will air Wednesday at 8 p.m. EDT on CMT, MTV, Paramount Network and other networks.

As much as tonight is about awards I really believe that being able to stand up here is more about great songs; it's more about the fans

As an entertainer, my goal is to create an enjoyable experience for people

American family farmers are what this country is built on ... and they have fed us and kept us strong and healthy for how many generations

This one is really actually special because, long before I had a hit record, the fans always came to the shows and I want to thank you guys for voting and for being there for me

Chesney named entertainer of the year May 18, 2008

I took one look at those fans, and there was no way I wasn't going on. Sometimes the energy and the adrenalin pull you through

Kenneth Arnold (Kenny) Chesney (born March 26, 1968) is an American country music singer and songwriter. Chesney has recorded 15 albums, 14 of which have been certified gold or higher by the RIAA. He has also produced more than 30 Top Ten singles on the U.S. Billboard Hot Country Songs charts, 20 of which climbed to the top of the charts.

Chesney recently produced and co-directed a film for ESPN, "The Boys Of Fall". Chesney has received six Academy of Country Music awards (including four consecutive Entertainer of the Year Awards from 2005 to 2008), as well as six Country Music Association awards. He is one of the most popular touring acts in country music, regularly selling out the venues at which he performs. His 2007 Flip-Flop Summer Tour was the highest-grossing country road trip of the year.

FULL ARTICLE AT WIKIPEDIA.ORG
This article is licensed under the GNU Free Documentation License.
It uses material from the Wikipedia article "Kenny Chesney."